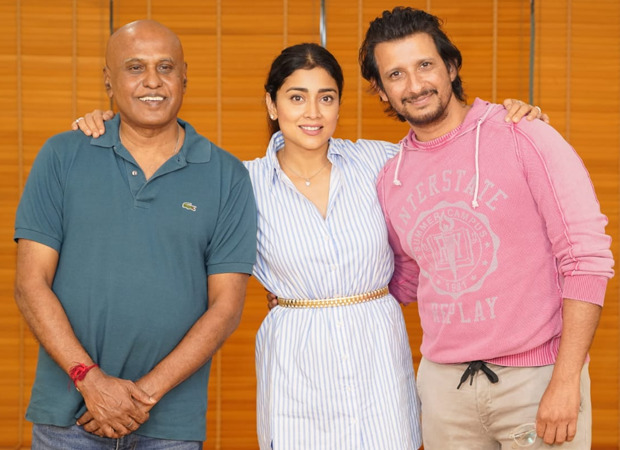 This series of 12 songs is about the pressure of our unimaginable education system in which children are given the goal of becoming doctors and engineers only by memorizing equations and not given enough time for sports and arts. This comedy musical journey set in Hyderabad will surely appeal to those who aspire to love, dream, laugh and sing. It will also celebrate the spirit of Goa with its beautiful open skies and expansive beaches.

Actor Sharman Joshi says, “I am extremely happy to be a part of Papa Rao’s musical school. This is my first multilingual film. I am looking forward to working with Ilaiyaraaja for the first time. I am excited and happy to be a part of this project. I look forward to working with Shriya, whom I know personally. I look forward to the start of this wonderful journey. It is a unique musical with a lot of emotion.”

Actress Shriya Saran says, “It is a dream come true. Ilaiyaraaja has always been an inspiration to all of us. Working with such a great London choreographer is like a dream come true again. Whenever I go to London, I watch all the musicals. My prayer was accepted. I am a Kathak dancer and it will be thrilling to learn a new dance form. I’m really looking forward to it. It’s like I’m living my dream. I am very blessed and grateful.”

Papa Rao Biyala says, “As a filmmaker, working with Maestro Ilaiyaraaja, Broadway choreographer Adam Murray and cinematographer Kiran Devhans is nothing short of an honour. Music School celebrates the fact that many of us have found comfort in music. Its songs depict a thrilling story of love and the quest for music. We are extremely excited that through this heartwarming musical, we will be bringing audiences to the theaters.”

Papa Rao Biyala, who studied at the New York Film Academy, has won a National Award and two International Awards for his documentary film “Willing to Sacrifice”. Sri Rao says that it is a matter of great honor for us to compose the music for this film by Ilaiyaraaja. He believes that Ilaiyaraaja’s lyrics and music have so much potential that it influenced Hollywood choreographer Adam Murry to work on the project.

The film will also have three songs from Sound of Music which will be used situationally.

Tags:Yamini Films announces
Share on FacebookShare on TwitterShare on PinterestShare on LinkedIn Share on TumblrShare on RedditShare on VKontakte
Bollywood HungamaOctober 29, 2021