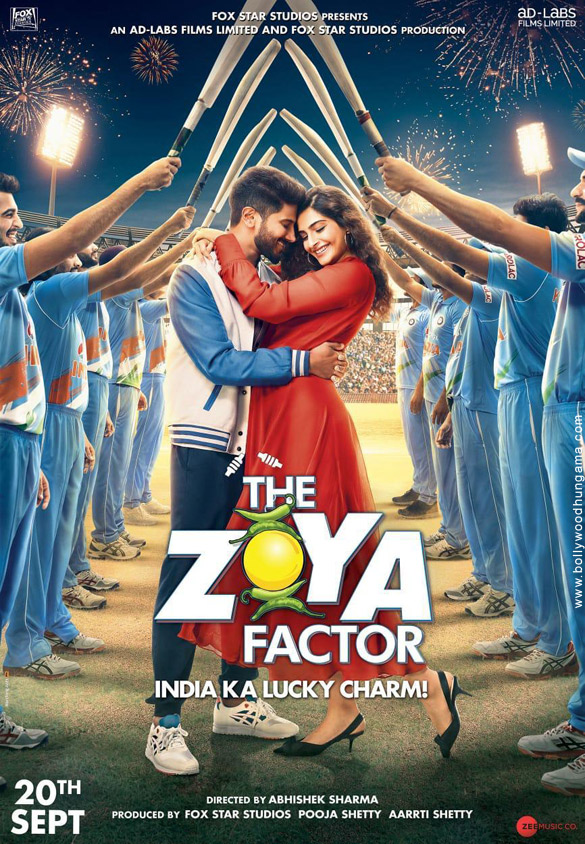 Last month, during the promotions of Mission Mangal, Akshay Kumar had revealed that he feels that success depends on 70% luck and 30% hard work. However, his statement surprised many. But there is also a class in the world that believes in luck a lot. Anuja Chauhan’s novel named ‘The Zoya Factor’ is based on this ideology. It has become a bestseller novel. So the rights were bought by Aarti Shetty and Pooja Shetty Deora and made a film on the same title, The Zoya Factor, which released in theaters this week. So will The Zoya Factor be able to entertain the audience in film form as well, or does it fail in its endeavor? Let’s review.

The Zoya Factor is the story of a girl who considers herself unlucky but is a lucky charm for the country. Zoya Solanki (Sonam K Ahuja) was born on 25 June 1983, the day India won the 1983 Cricket World Cup final. Her father Vijayendra Singh Solanki (Sanjay Kapoor) announces that Zoya is born on such an auspicious occasion so she will be lucky for the cricket team. Growing up, Zoya actually turns out to be a lucky charm for Vijayendra and his brother Zoravar (Sikander Kher) when they play street cricket. But after becoming an adult, Zoya begins to consider herself unlucky. The craziness of his family members for cricket causes him to dislike the game. She works as a junior copywriter in an advertising agency called AWB and makes frequent mistakes to harass her boss Monita (Koyal Puri). Monita sends Zoya for an advertising campaign for the Indian cricket team in Sri Lanka and warns her not to make any mistake. Zoya reaches Sri Lanka and befriends Nikhil Khoda (Dulquer Salmaan), the captain of the Indian team. This is a time when players are losing back-to-match matches. There is still a month left for the World Cup and its pressure is bothering him. On the day of their match in Sri Lanka, Nikhil invites Zoya to have breakfast with the players. Here, Zoya suddenly reveals her date of birth and her lucky charm. On that day, India won the match miraculously. Players start feeling that Zoya is indeed the lucky charm for the Indian cricket team. They make many excuses to stop him from going back to India and try to stop him anyway for the next match. As expected, they win the match. Nikhil however does not believe in luck and the Zoya factor and feels that he works hard. Meanwhile, Jogpal Lohia (Manu Rishi Chadha) of the Indian Cricket Board learns about Zoya. He contacts Zoya and offers her one crore rupees to have breakfast with Indian cricket players whenever there is a match. But Zoya turns down the offer. Jogpal wants to take on Zoya by any means so he hands over the World Cup campaign to AWB with instructions that Zoya lead it. In this plan, Jogpal is helped by his nephew Robin (Angad Bedi), who is himself a part of the team and is Nikhil’s rival. He wants Nikhil to be removed from the captaincy so he uses Zoya for his evil purpose. What happens next after this, it will be known after watching the rest of the film.

The Zoya Factor is based on Anuja Chauhan’s novel of the same name. The story has a lot of relatable facts and is quite believable. Many people believe in luck as well as are cricket fans and hence in a country like ours, a story like this can connect with the audience. Pradyuman Singh Mall and Neha Sharma’s screenplay (with additional screenplay by Anuja Chauhan) is effective for most parts. The film has not been made an emotional event anywhere. The film has been made light-hearted and entertaining from beginning to end. In a way, it is great but at the same time, it loses its emotional touch. The dialogues of Pradyuman Singh Mall and Anuja Chauhan are very funny and contribute a lot to the humour. The dialogues delivered by the commentators are sure to be loved by the audience.

Abhishek Sharma’s direction is decent. He has executed some scenes in a very captivating manner but there are also some scenes in which he has been a bit hasty. But the creativity of his execution comes out in many scenes. The scene where it rains is one such sequence – Nikhil’s focus on returning to the pavilion while Zoya can be seen on the huge screen in the foreground. Furthermore, he has used subtle allusions to show that the film is set 9 or 10 years ago. And this is reflected in the use of old mobile phones. The idea of ​​not basing ZOYA FACTOR in 2018 or 2019 is understandable as Zoya’s age is not more than 26 or 27. Also, product placement can be a thorn in the eye in most of the movies but here it is the main part of the film. For example- Cadbury cyln is well woven into the TVC story.

The Zoya Factor, has a very impressive opening that gives an idea about the cricket and luck elements of the film. Shah Rukh Khan’s witty style as the narrator and the animated sequences are fun. Zoya’s opening scenes are fine, but the film gets better once she reaches Sri Lanka and mixes with the Indian team. There are many good moments in a romantic trek too. The two scenes here are spectacular – Zoya interacting with Nikhil in the elevator and Nikhil meeting Zoya’s family and family friends. After the interval, the film gets a bit shattered. Apart from this, the film seems to be very run-of-the-mill at many places. The pre-climax World Cup sequence and climax certainly add to the interest in the film.

Talking about acting, all the actors take the lead in it. Sonam Kapoor Ahuja perfectly suits her role and without her this role cannot be imagined. She does complete justice to her role. She presents every emotion of her character well on screen. Dulquer Salmaan, looks very dashing and suits his role. He gets completely absorbed in his character and gets engulfed in the role of Captain. Angad Bedi has got a good amount of screen time which he makes full use of and suits as a badass. Sikandar Kher is like a surprise in the film. Although his character is not known, you know it or not. [2008] Reminds me of the character of the symbol. But Sikandar is captivated by his role. One of his best scenes is when he offers tea to the protesters. Sanjay Kapoor looks natural. Manu Rishi Chadha is fine and he does not bowl. Koel Puri is strictly fine. Pooja Bhamrah (Sonali) looks quite glamorous and plays the supporting role well. Among other cricketers who make their mark are Abhilash Choudhary (Shivi), Gandharva Dewan (Harry) and Sachin Deshpande (Lakhi).

Shankar-Ehsaan-Loy’s music suits the mood of the film. ‘Lucky Charm’ is the best among all and is followed by ‘Kash’ and ‘Meheru’. ‘Pepsi Ki Kasam’ is played in the end credits. Indrajit Sharma and Parikshit Sharma’s background score (with additional background score by Kingshuk Varnavarthy) is dramatic and fun.

Manoj Lobo’s cinematography is apt and the lensman does a good job especially in the cricket scenes. Theia Tekchandaney, Abhilasha Devnani and Gayatri Thadani’s costumes are very attractive. Exclusively the outfits worn by Sonam. Rajat Poddar’s production design is rich. The studio’s VFX is also quite good, though it is a bit bad in some scenes. But overall, it’s a decent job, as it’s mostly shot in green screen. Utsav Bhagat’s editing gives the film a strange feel.

Overall, The Zoya Factor is a decent popcorn entertainer film that works well for its unique concept, execution, humor and scintillating performance. At the box office, the film has the potential to perform well on the strength of good acclaim.