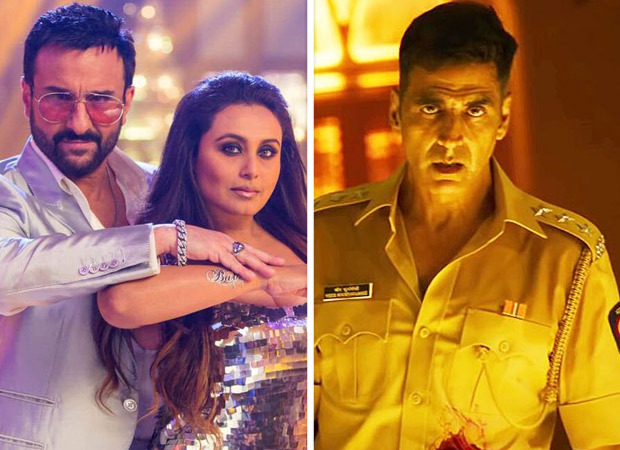 The tussle between Bunty Aur Babli 2 and Suryavanshi, which has earned more than 200 crores worldwide, advance booking not yet opened

Saif Ali Khan, Rani Mukerji, Siddhant Chaturvedi and Sharvari Wagh’s Bunty Aur Babli 2 is all set to hit the theaters on Friday, November 19. There is not even 24 hours for the release of the film, so some theaters have not even started advance booking of the film, especially in single screen cinema halls. And Bollywood Hungama has come to know the reason behind it. We have learned that the reason for the non-starting of advance bookings is due to show sharing issues.

The tussle between Bunty Aur Babli 2 and Sooryavanshi

A close source told Bollywood Hungama, “This is exactly like what happened two weeks ago. At that time there was a tussle between Sooryavanshi and Eternals over show distribution. It has been 2 weeks since Akshay Kumar’s Sooryavanshi released on 5th November and the film is doing well at the box office so far. That’s why Sooryavanshi makers want at least 2 or 3 shows of Sooryavanshi to be shown in the third week as well. Meanwhile, Yash Raj Films (YRF), the producer of Bunty Aur Babli 2, has also asked for 3 shows in a day in single-screen theatres. In such a situation, the exhibitors are trying to find out the solution as soon as possible.

Sooryavanshi needs show in the third week too

The source further added, “Sooryavanshi has already completed two weeks of its release but is still doing well in many places, especially in Maharashtra and Gujarat. Maharashtra has the permission to open cinema halls with 50% occupancy, so many people have not seen the film yet, one of the reasons is that they did not get the ticket earlier. In such a situation, a section of the audience will now see Suryavanshi in the third week. That’s why Sooryavanshi makers want Suryavanshi’s shows to continue in theaters along with Bunty Aur Babli 2. Sooryavanshi makers are waiting to touch 200 crore mark in which Maharashtra will play an important role.”

However, trade experts have ensured that soon the decision will be taken in everyone’s favor.