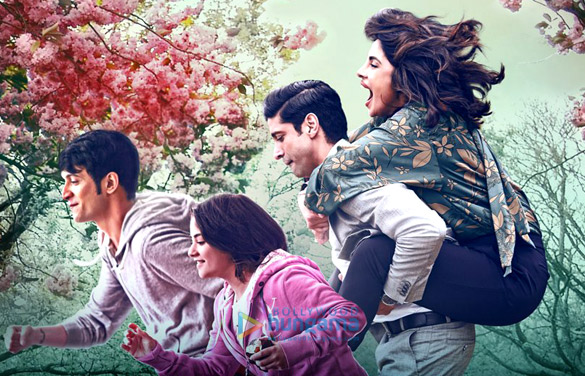 The death of their child is the saddest moment for any parent. Director Shonali Bose has made a film based on a similar issue, The Sky Is Pink, which hit the theaters this week. The Sky Is Pink is a film based on the life of the youngest motivational speaker Ayesha Chaudhary. So does this film touch the hearts of the audience or does it fail in its endeavor? Let’s review.

The Sky Is Pink is the story of a family that has been battling trouble for almost two decades. Niren Choudhary (Farhan Akhtar), a resident of Chandni Chowk, marries Aditi Chaudhary (Priyanka Chopra), his childhood sweetheart, in 1986 from South Delhi. After a few years of marriage, they have a son, Ishaan (Rohit Saraf). After this Aditi gives birth to a daughter whose name is Tanya, it dies in just 6 months. This is because both Aditi and Niren have a rare defective gene in one of them. They try for a child again and on March 27, 1996, Ayesha (Zaira Wasim) is born. The sad part is that like Tanya, Ayesha is also born with a rare faulty gene from her parents, due to which she suffers from an immune disorder called Severe Combined Immunodeficiency (SCID). Since Aditi and Niren do not want to lose their daughter this time, they try to save Ayesha at all costs and so he takes her to London for treatment. At the age of just 6 months, Ayesha had a bone marrow transplant, the side effects of which are visible after a few years and the problem comes in her lungs. This is when Ayesha is 13 years old. Now Aditi and Niren try to keep Ayesha alive by all means. What happens next after this will be known after watching the rest of the film.

The story of Shonali Bose and Nilesh is quite promising which could have turned out to be the most touching film of the year. Shonali Bose and Nilesh Maniyar’s screenplay works only in parts. Some scenes are extraordinary but in some scenes, the desired effect of the writing is not visible. The film has multiple flashback modes which makes it a bit difficult for the audience to understand. Juhi Chaturvedi and Nilesh Maniyar’s dialogues are fine. Some one-liners work well and are funny. But some dialogues misfire, especially Ayesha’s narration written by Nisha. The humor in the dialogues is forced, especially in the sex life of Aditi and Niren.

Shonali Bose’s direction is strictly fine. She had a very good subject in her hand but she fails to do justice to it. The film is 149 minutes long which should have been shorter. At the same time, some of the details in the film are completely missing which needed to be focused. Because Ayesha Chowdhary was a motivational speaker, but in the film, her form is shown only for a few seconds. The audience too would have surely loved to see Ayesha as a motivational speaker. But alas this does not happen. Apart from this, it is mentioned at one place that Niren also has a band but it is not shown anywhere in the film. Shonali has tried to make the entire film light so that the film does not feel heavy. That’s why he has also added some funny scenes in it. Although Shonali has handled some scenes very well. The best point of the film is the bonding of Aisha and Ishaan. It will be well liked.

The Sky Is Pink begins in the year 2015. In the story, it is shown that nothing is right between Aditi and Naren. The film then goes into flashback. Where Aditi and Naren take their newborn Ayesha to London for treatment. Some of the scenes in the film, however, are spectacular, such as Aditi warning Naren to stay away from a girl named Sonia, followed by Naren’s surprise visit to London to persuade Aditi, when Farhan is confronted by his elder son Ishaan’s report. It turns out that he is not her son. The emotional touch is missing in the first half of the film. Some scenes in the second half are spectacular and leave an impact. But the biggest drawback of the film is its run time. At the same time, the content of the film, the subject and even the title will entice the select audience.

Priyanka Chopra delivers a stellar performance and pulls off the entire film with her scintillating performance. Her character in this film is quite complex which she plays with great ease. Zaira Wasim looks very confident. Although the story of the film is based on his life, the first half of the film is spent in his childhood. As a result his entry is very late in the film. But his voiceover is heard with the first scene of the film. She manages to be a happy person despite suffering from a serious illness. Farhan Akhtar suits his role. Sadly, the story of the film mostly revolves around Priyanka and Zaira so they get little chance to filter. Rohit Shroff looks dashing and in some scenes of the second half, he dominates. Rajshri Deshpande (Anita Tandon), who made her mark in SACRED GAMES, disappears in the blink of an eye throughout the film. Ishan Jotshi (Karan; Ayesha’s crush) suits his role. Sudhavan Deshpande (Dr Nirvik), Pooja Sarup (Mohini), Sunil Chitkara (Naren’s father) and Nirupama Verma (Naren’s mother) are fine in their roles.

Pritam’s music is average. ‘Dil Hi To Hai’ is the better of all the songs and it is shot very well. ‘Naadaaniyan’ and ‘Zindagi’ are not memorable. ‘Pink Pink’ is played in the end credits. Mickey McCleary’s background score is a bit dramatic and works only in a few scenes.

The cinematography of Kartik Vijay and Nick Cook is apt. The locations of Andaman and Nicobar Islands are well captured. Aradhana Seth’s production design is realistic and eye-catching. Ika Lakhani’s costumes are perfect and don’t look out of place in the slightest. Manas Mittal’s editing could have been more sharp.

Overall, The Sky Is Pink has a very good plot but fails due to weak execution and long run time. The film will attract select audiences and cities at the box office.