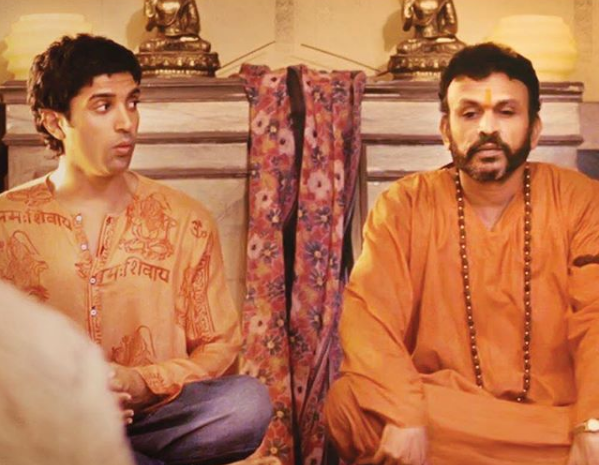 In today’s time, it is a big deal for a film to release at the right time. But there are many such films in Bollywood which did not get the right release date due to some reasons, due to which the impact of their films was reduced. Those Bollywood films which took five to ten years to release are: Deewana Main Deewana [2003], these moments of separation [2004], Mehboob [2008], My love I swear this on you [2009], We will definitely meet [2010] And so on . And now the Fakir of Venice starring Farhan Akhtar and Annu Kapoor has also been added to this list. Actually this film was shot by Farhan even before his debut film Rock On. But due to some reason this film could not be released. So will The Fakir of Venice be able to make a place in the hearts of the audience after such a long time or will it prove to be a failure in its effort, let’s review.

The Fakir of Venice is the story of an Indian fixer who has a life-changing experience. Adi Contractor (Farhan Akhtar) works in films as a production controller. His job is to ensure that the bizarre demands of the producers are met. He once manages to get a monkey from China as per the shooting of an urgent film near the border on the Indian border in the Himalayas! He is based in Mumbai where his ex girlfriend Mandira (Kamal Sidhu) and his colleague Avantika (Sushma Prakash) ask him to fulfill his need for a prestigious art gallery in Venice. He is assigned the task of bringing a mystic or monk to the Museum of Venice who can engage in spiritual practice by burying his head in the sand and keeping his feet out. After exploring from Kumbh to Kashi, Bah returns to Mumbai. After returning to Mumbai, he met Amin aka Goldtooth. [जोगिंदर सिंह], who is a ‘jugadu’ man, decides to meet him. Amin introduces Adi to Sattar Shaikh (Annu Kapoor), a poor man who makes a living by painting buildings. Adi thinks Sattar is suitable for this job. Sattar also agrees to this and comes to know that by doing so he will get a good amount of money so that he will be able to give money to his married sister Hamida (Jhilmil Hajrika). In making Sattar a sadhu or a fakir, Adi takes the help of Mandira who gives him the clothes of the fakir. Adi reaches Venice with Sattar and the film truly begins. He is stunned to see a fakir in Venice who buries himself in the sand and only his hands are visible outside. At the same time, Adi spreads things about the fakir that the fakir has some charismatic power by which he is able to do this. What happens after this, it is known only after watching the rest of the film.

The story of Rajesh Devraj is reportedly based on filmmaker Homi Adajania, better known as Being Cyrus. [2006]handjob cocktail [2012] and finding fanny [2014] Known for directing, based on the life of The plot is interesting and if it had been in the right hands, it could have turned out to be a good film. Rajesh Devraj’s screenplay looks a bit messy and fails to make the necessary impact. It especially starts falling apart in the second half when Sattar’s issue comes to the fore. Rajesh Devraj’s dialogues are simple but a bit didactic. Also, Aadi is narrating the film in English and such a strategy may reduce its box office prospects. Many dialogues were full of abuses which were muted by CBFC. Hence, it is difficult to understand some of the sentences rendered by the characters.

Anand Surapur’s direction is not that good as he could have done a lot with such subjects and characters. The delay of the film is a loss deal for it.

The Fakir of Venice starts off with a lot of fun, but the thrilling background score doesn’t work. It soon becomes clear that the film has a film festival-feel and should be viewed in that regard. The film is just 98 minutes long and the first half is very likable and light. Whereas the second half is quite heavy and awkward. It seems like Sattar wakes up screaming again and again. His whole dilemma could have been explained better. The scene where Sattar runs away from the hotel looks quite over, but is there to pique the interest. Also, he enters the same place where Adi is having party. Some scenes in the film are very difficult to digest. Technically too, the film looks quite old. However, the film ends on a good note. But it is too late to make the desired effect.

Farhan Akhtar looks quite young as expected and his two debut films – Rock On [2008] and luck by chance [2009] reminds of. Well, this look suits her a lot. Talking about the acting, he delivers excellent performance without any shortcomings. He plays the character of a Sailfish man brilliantly in this film. By the way, one can feel by seeing his performance that he is suppressing Sattar by giving his performance. But Annu Kapoor is the lifeblood of the film and saves the film to some extent from being a huge flop. Kamal Sidhu gets ruined. Valentina Karelutti (Jia) plays an important role in the second half of the film. Jhilmil Hajrika looks very authentic. Sushma Prakash, Joginder Singh and Matthew Carrier (Massimo) are passable.

A R Rahman’s music does not make any impact. The song ‘Wako Naam Fakir’ is played in the background and is not memorable. The background score is weird at many places and it gets loud in some scenes. The cinematography of Deepti Gupta, Preeta Jayaraman and Bakul Sharma is fine. The color correction in an important scene was also not done correctly. Susannah Codengato’s production design is decent. Anand Surapur’s editing is just fine and a bit haphazard too.

Overall, The Fakir Of Venice is a film packed with interesting storyline and stellar performances by Annu Kapoor. But the flawed execution, the festival-style narrative and especially the delayed release, will weigh heavily on the film.