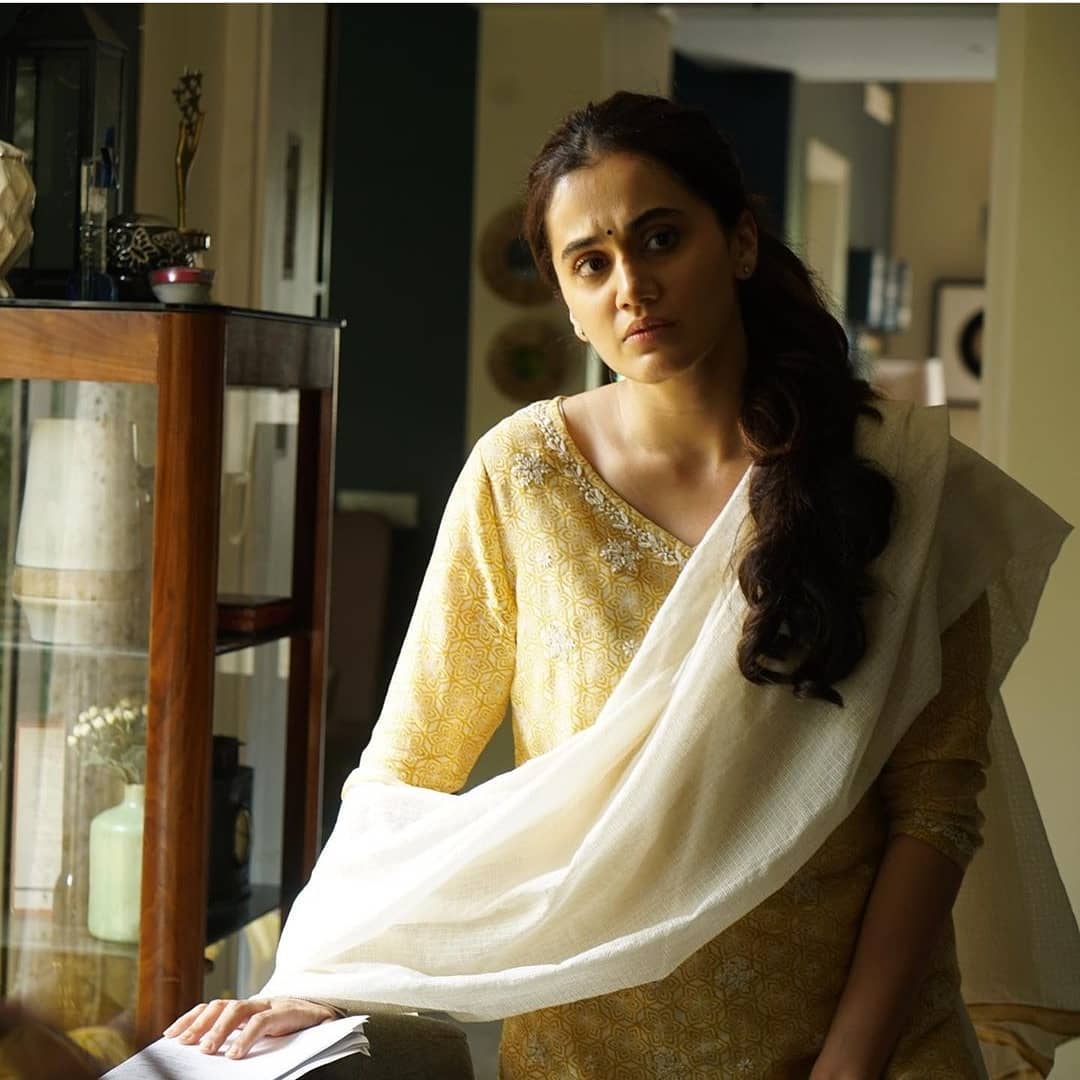 We have entered the year 2020 today but it is a pity that even in today’s modern and scientific era there are many such objectionable issues which are still present in the society. Even in this era of education and technology, atrocities against women are not taking the name of stopping. Filmmaker Anubhav Sinha, who made his films Mulk [2018] From Hindu-Muslim Unity, Article 15 [2019] raised the issue of casteism. And now once again Anubhav Sinha has brought Thappad, which depicts the issue of domestic violence against women. Taapsee Pannu has played the lead role in the film Thappad, releasing in theaters this week. So will Thappad like Anubhav Sinha’s previous two films manage to stun the audience or will it fail in its endeavour? Let’s review.

Thappad is the story of a woman who fights the toughest battle of her life. Amrita (Taapsee Pannu) is a housewife and lives happily in Delhi with her husband Vikram (Pavail Gulati). Vikram works in a reputed company and is looking for an opportunity that will send him to London for work. Amrita knows how much this means to Vikram. She supports him to fulfill his dream and his whole life revolves around him and Vikram’s mother Sulochana (Tanvi Azmi). Finally Vikram’s dream is about to come true and he is selected to go to London. And the same night he organizes a party at his house. Everything is going well when he gets a call from his senior, Thapar. He informs Vikram that he cannot find the desired profile that he is looking for in London and he has to report to an authority there. Vikram gets upset hearing this. And when Amrita tries to handle him, Vikram slaps Amrita. She tries to forget it but she can’t. Vikram too feels sorry when he learns that Amrita is heartbroken over his actions. He tries hard to persuade her but nothing works. Angry, Amrita goes to her parents’ (Kumud Mishra and Ratna Pathak Shah) house. Vikram stops her and later comes to get her back. But she doesn’t agree. Vikram then sends her a legal notice. Swati (Nella Grewal), the girlfriend of Amrita’s brother Karan (Ankur Rathe), suggests that Amrita should show this letter to Nithra (Maya Sarao), a reputed lawyer and Swati’s boss. Netra suggests that Amrita should resolve the issue amicably. Amrita insists on divorce. What happens next after this, it will be known after watching the rest of the film.

The story of Anubhav Sushila Sinha and Mrinmayi Lagoo Vakul is brilliant and commendable. In a society where repetition of violence against wives by husbands is fairly common, it takes courage to come up with a film where a woman is killed only once by her husband but she doesn’t take it lightly took . The screenplay by Anubhav Sushila Sinha and Mrinmayi Lagoo Vakul (Script Advisor: Anjum Rajabali) goes a long way in ensuring that the audience understands the team’s vision. They understand very well the position that patriarchy is deeply ingrained in the minds of not only men but also women. Anubhav Sushila Sinha and Mrinmayi Lagoo Vikul’s dialogues are very sharp and add to the impact of the film. It has a lot of one-liners which will surely hit the audience and make them reflect on their own wrongdoings.

Anubhav Sushila Sinha’s direction is superb. Not only has he written a great script, but he has also handled it very well. The mood and the world in this film is different as compared to Mulk and Article 15 and she understands it well and does justice to it completely. Amrita’s plight is well established. There are many sub-plots here which are well intertwined and match the original story of the film. Some scenes are very good like Shivani (Dia Mirza) hugging Amrita, Sulochana ignoring the slap and insisting that Amrita should mix with the guests, Amrita’s father misbehaving with Swati. scolding her son, Amrita’s mother Sandhya not getting support to continue her singing career, clashes between lawyers etc. On the contrary, the second half feels a bit drawn out. The makers should have scrapped Sulochana’s track. Additionally, they could track down a lawyer who cheated on her husband. It will be a bit difficult for the audience to digest that Vikram does not apologize to Amrita even after this. It is surprising to see that all the people around his Vikram did not even ask him to apologize. This issue is raised in front of him only before the climax.

The beginning of Thappad is quite impressive where all the supporting characters are introduced and there is an ice cream resemblance between them. Amrita’s introduction is superb. This Nishikant Kamat’s classic Marathi film Dombivali Fast [2004] Looks like it but it works well. The high point of the film is the party sequence, especially Thappad. After this scene, the film seems to be slowing down. All these scenes are very important as it shows how Amrita’s life changed after a slap. Intermission point is good. Post interval, the interest remains intact but from here the film starts to drag. After the party scene some blast is expected but alas nothing like this happens. The clash is in sync with the film’s plot and mood, especially, but it can feel light. The film ends on a fitting note.

Thappad is a film adorned with excellent performances by many actors but without any doubt it is Taapsee Pannu’s film. Taapsee Pannu has given many memorable performances but this will surely be one of her most outstanding performances. She gets into her character completely, seeing that the audience completely forgets her earlier characters. When you see her performing her duties as a housewife you forget that it is Taapsee. Pavail Gulati makes his brilliant debut. He looks dashing and plays his character well. Kumud Mishra looks amazing. Anubhav Sinha has always brought out the best from him and Thappad is no exception. Ratna Pathak is fine and leaves an impact. Tanvi Azmi also does justice to her character and her dialogues in the finale are worth watching. Maya Sarao is rich in talent and her performance is worth watching. She does a great job especially with her body language. Geetika Vidya (Sunita) gets to play a memorable role and she plays it well. Dia Mirza’s screen time is limited but she manages to do it well. Gracie Goswami (Sania; Shivani’s daughter) has a decent screen presence and plays it well. Naila Grewal, Manav Kaul (Rohit Jaisingh), Ram Kapoor (Advocate Gujral) and Ankur Rathe are good. Harsh A Singh (Thapar), Santanu Ghatak (Vikram’s associate Subodh), Rohan Khurana (Neethra’s love interest), Sushil Dahiya (Vikram’s father), Siddhan Karnik (Vikram’s brother), Nidhi Uttam (Vikram’s sister-in-law) and others The actors play their roles well.

There is no place for Anurag Deepali Saikia’s music. Although the song ‘Ek Tukde Dhoop Ka’ is good. Mangesh Urmila Dhakad’s background score is superb. There is a jazz style music in the opening scenes which gives a nice feel. Soumik Sarmila Mukherjee’s cinematography is top class. Vishakha Vidya Kullavar’s costume is looking alluring, especially the sari worn by Taapsee at the party. Jyothika Mirpuri Awara’s make-up and hair are as per the film. Nikhil Kshipra Kovale’s production design is good. Yashpa Pushpa Ramchandani’s editing could have been tighter, but overall she has done a commendable job.

Overall, Taapsee Pannu’s finely acted Thappad makes a strong commentary on violence against women and patriarchy. At the box office, the film will be well received by its target audience, especially women.