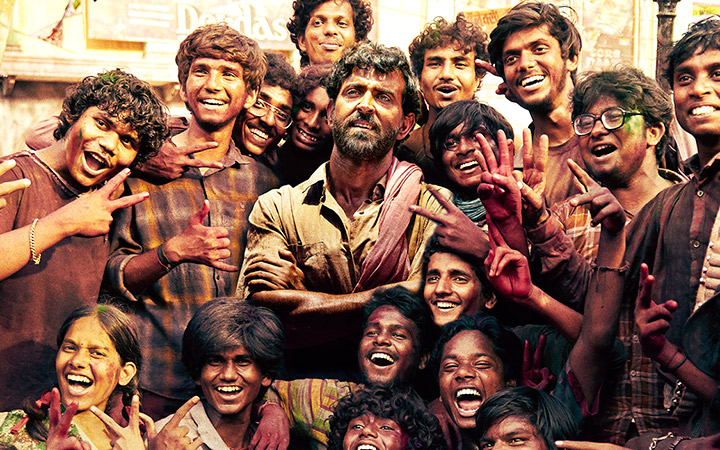 Increasing population is the biggest problem of the country due to which poverty and illiteracy flourish in the country. Not everyone gets the right to education according to them. In this trend of poor-rich class, the rich get their due but the poor, who is talented but does not have the money worthy of it, is deprived of honing his talent. Therefore, Anand Kumar of Bihar created an institute named Super 30 for the poor and backward class people, which prepares for the entrance examination of IIT, JEE. And this week a film based on this selfless man has hit the theaters, Super 30. Hrithik Roshan plays the role of Anand Kumar in Vikas Bahl’s directorial Super 30. So will people give love to Super 30 or will it fail to make a place in the hearts of the audience? Let’s review.

Super 30 is the story of a selfless man who is fighting for the education of all. The year is 1996, Anand Kumar (Hrithik Roshan) has completed his graduation and is very passionate about maths subject. He is so good in maths that he is honored by the education minister (Pankaj Tripathi). Anand has the quality that he can solve even the most complex mathematical problems in a pinch and the whole world is amazed by this skill of Anand. His ability manages to get him admitted to the prestigious Cambridge University. To study abroad, his father Ishwar Kumar (Virendra Saxena), a postman by profession, withdraws his PF for Anand’s overseas education. But still, Anand is unable to meet the expenses of his studies abroad, then he and Anand plead for help at the door of the Education Minister, who had promised to help him. But the minister refuses to help them. Meanwhile, God suddenly passes away one day. He was the only earning member of the family and hence, Anand gives up his dream of studying abroad and starts selling papads to earn a living. One day, he bumps into Lallan Singh (Aditya Srivastava), who runs an excellence coaching center for IIT-JEE exam takers. Lallan is fully aware of Anand’s talent as he was in the same college when Anand was awarded in the college. He takes Anand to his coaching institute as a premium teacher. Anand’s method of teaching is such that it guarantees success, so it is in great demand. Excellence Coaching Center Management uses Anand’s picture on its banner for its promotion. Although Anand’s financial condition improves with this coaching, he does not seem satisfied. Anand is deeply saddened to learn that some talented student is not getting the right opportunity as he cannot study in expensive coaching due to his poverty. Overnight, Anand leaves the Excellence Coaching Center. And opens his own separate coaching institute where he decides to teach 30 students for free of cost IIT entrance exams. Not only this, he also arranges for their accommodation and food. Lallan gets furious seeing all this. And he tries his best to persuade Anand. He tries many times to humiliate Anand. At the same time, every student of Anand passes in the IIT examination. What happens next after this, it is known after watching the whole film.

Sanjeev Dutta’s story is good and has a lot of potential. However, the events depicted in the film seem unreal at many places. Makers claim that the film is based on true events but some scenes shown in the second half seem to be fictional. Sanjeev Dutta’s screenplay is strong and clear in the first half. A lot happens here but it is all well written. The writing gets shaken in the second half. Also the writing seems a bit old. Earlier in many movies we have seen the battle of good vs evil. Sanjeev Dutta’s dialogues are sharp and leave the right impression.

Vikas Bahl’s direction is average and could have been better. In the first half he has managed everything very well but in the second half everything falls apart. There are many loopholes here like – What did Lallan and the minister say about the Super 30 program so much that they agreed to kill Anand? The funny thing is that Vikas gives a little hint on the whole education scam through the film. But for a better effect, they should have researched the subject more deeply. In the absence of details, it seems quite shallow. The second thing is that some students suddenly appear. There is a way to present important characters. In Super 30, Raghunath (Amit Sadh) and Purushottam (Manav Gohil) suddenly appear out of nowhere and it takes a while to understand who they are and their relevance to the plot of the film. Similarly, moving towards the climax, some of the main characters disappear without a trace. The biggest foolishness by development happens in the Holi sequence. It goes down quite flat and leaves no impact. This is Vikas’s last film. [2015] is reminded of. Even the hospital scene at the end seems stretched out.

Super 30 has an interesting opening, featuring Fugga (Vijay Verma) as a sort of storyteller, who narrates the story of Anand to the audience in London. The film’s focus immediately shifts to Patna but the opening scenes were not well directed. But at the same time all this keeps the audience glued to the screen. A lot happens in the first half – Anand getting selected for Cambridge, teaching in a big coaching institute to become rich, and opening his own coaching centre, etc. So, there is no boredom anywhere in the 75 minute long first half. The second half starts off well. Meanwhile, the order of competition between Excellence students and Anand’s students is impressive. But after this the film starts to disintegrate from the Holi scene. The message of the film does not come out well. Some viewers find the climax too filmy. But it is thrilling and also moving, so all this does not have much effect on its effect. The final scene of the film is very inspiring and a fitting way to end the film.

Super 30 rests completely on the shoulders of Hrithik Roshan and there is no doubt about it. She is the lifeblood of the film and hence, in spite of being shattered in the second half, it generates excitement. Hrithik wins hearts with his Bihari look, his accent, makeup, body language, clothes etc. And once again Hrithik manages to prove why he is one of the most talented actors even in the present day. Mrunal Thakur (Rashmi) suits her role and delivers a stellar performance. She has a small role but fits well in the story. Aditya Srivastava looks quite good in the role of the villain. Pankaj Tripathi looks fake. In some scenes he works but in some places he does not suit. Virendra Saxena is adorable and his character is heart-wrenching. Nandish Singh (Pranav Kumar) is fine as Anand’s brother. Amit Sadh (Raghunath) suits his role very well and the badass look suits him a lot. But sadly, his presence on screen is very less, due to which you would feel that he was seen a little more. Vijay Varma is entertaining in the intro scene but later the importance of his character will be questioned by the audience. Rajesh Sharma gets ruined and then you wonder why this character was there in the film after all. Manav Gohil looks natural. In the item song, Karishma Sharma manages to spread herself. Talking about the students, all the actors have done a good job. But the ones who make the most impact are Ghanshyam Kumar (Chhote Fugga), Deepali Gautam (Kusum) and Rahul Raj (Kishore).

Ajay-Atul’s music is not of chartbuster type and but it seems that at least one song would have been a chartbuster, like the theme song. ‘Jugrafia’ is the best of all. “Paisa” is situational. ‘Question Mark’ on paper is good but not well made. ‘Niyam Ho’ is played at a crucial juncture. ‘Basanti No Dance’ is terrible. Ajay-Atul’s background score a bit loud But it works properly.

The cinematography by Anay Goswami is apt. Alan Amin’s action is realistic and nothing is overdone. Amit Ray and Subrata Chakraborty’s production design is quite original. The costumes of Subodh Srivastava and Niharika Bhasin Khan are well suited to the script. None of the characters in the film look glamorous from any angle. Vikram Gaikwad’s make-up is especially commendable in the case of Hrithik. Mukesh Chhabra’s casting deserves applause especially in the case of students’ casting. Sreekar Prasad’s editing is uncompromising and much better work was expected from an editor of such caliber.

Overall, the first half of Super 30 is superb but the film falls apart in the second half. However, the film manages to make an impact due to the emotional scenes and the stellar performance by Hrithik Roshan. At the box office, the film will need positive applause to pull the audience to the theatres.