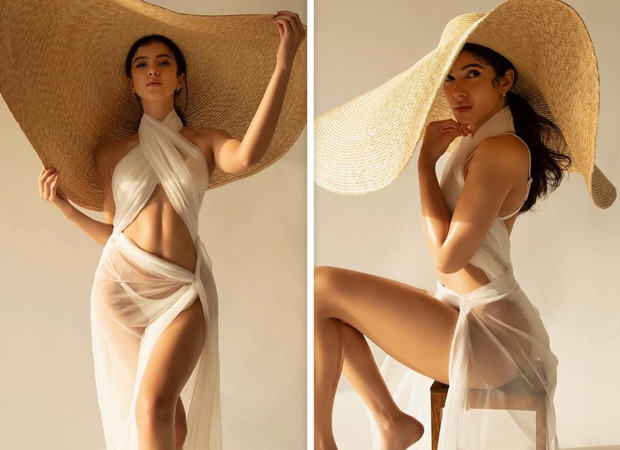 Sanjay Kapoor and Maheep Kapoor’s daughter Shanaya Kapoor is going to make her Bollywood debut soon. Karan Johar, who is considered to be the launching pad of star kids in Bollywood, will launch Shanaya in Hindi cinema. But even before becoming a Bollywood actress, Shanaya Kapoor has become a social media star. Shanaya Kapoor is increasing her fan following on social media with her bold and hot photos and videos. Once again Shanaya has come into limelight due to her photoshoot.

Shanaya has shared some pictures from her photoshoot on her Instagram, in which she is seen posing in her hot style in a transparent dress of white color. Straw hat is making Shanaya look more attractive. In a Thai-high slit dress, Shanaya is seen flaunting her sexy figure. Let us tell you that this is an old photoshoot of Shanaya which she has now shared.

Like Alia Bhatt, Jhanvi Kapoor and Ananya Panday, Shanaya will also make her Bollywood debut with Karan Johar’s film. Announcing this officially, Karan Johar said that Shanaya Dharma will make her acting debut through Cornerstone Agency. It will be announced in July.

According to information received by Bollywood Hungama, Shanaya will debut with two talents from Karan’s Dharma Cornerstone Agency, Gurfateh Pirzada and Lakshya Lalwani. It will be a rom-com film based on an urban love triangle love story. The shooting of the film will start in the middle of this year. It will be decided during the shooting when Shanaya’s debut film will be released.