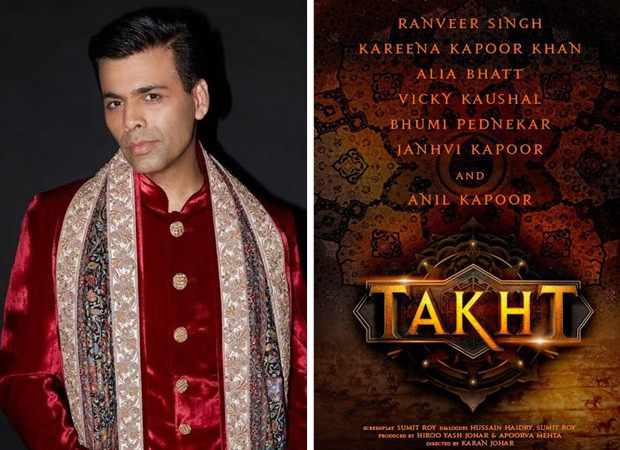 Films News > Blog > Bollywood News > SCOOP: Karan Johar’s most expensive multi-starrer film Takht closed even before it started, this decision had to be taken due to these reasons
Bollywood News

SCOOP: Karan Johar’s most expensive multi-starrer film Takht closed even before it started, this decision had to be taken due to these reasons

Karan Johar, who directed films like Kabhi Khushi Kabhie Gham, Kabhi Alvida Na Kehna, My Name is Khan, Student of the Year and Ae Dil Hai Mushkil, made another film under his direction, Takht, which is a multistarrer historical period. When the announcement of the drama film Hai, there was tremendous enthusiasm among the people about it. In the year 2018, Karan Johar announced his multi-starrer film. This film was also special because not one but 7 big stars were seen together and those stars are – Anil Kapoor, Kareena Kapoor Khan, Vicky Kaushal, Ranveer Singh, Alia Bhatt, Janhvi Kapoor and Bhumi Pednekar. Apart from its starcast, Karan Johar’s Takht was also in the news for its huge budget.

Karan Johar put Takht on hold for these reasons

Now those who were eagerly waiting for Karan’s Takht must be disappointed to hear the news as Karan has put his ambitious film Takht on hold with a heavy heart. Meaning that Karan will not make this film yet.

A close source reveals, “There are many reasons to put Takht on hold. In which the first reason is its big budget i.e. it was going to be the most expensive film. The estimated budget of Takht is around 250-300 crores. Now like every filmmaker, Karan also suffered a lot during the corona pandemic. Apart from this, his other expensive films Brahmastra and Liger, which are in production stage, are awaiting their release. And not only these, other films like Dostana 2, Jug Jug Jio and Shakun Batra’s upcoming film are also in their final stages. In such a situation, it is not right to start the throne.

The source further added, “From the beginning, there was no support from any other studio for Takht. It was believed that Fox Star Studios would support Takht as it had a partnership with Dharma. But it didn’t happen. Karan also tried to bring in several other studios for Takht but his efforts were in vain.

Not only this, the source further added, “Takht is a film based on Mughal history. Looking at the current political climate, making a film on this subject is not the right decision because no one can tell when things go wrong. We all have seen the protest against Sanjay Leela Bhansali’s Padmavat. So Karan felt that at such a time he could not afford to invest money in a film like Takht. So Karan decided to close Takht for the time being. Maybe he will resume work on the throne after a few years.”

The source concludes before concluding, “All the cast managers have been informally informed about Karan’s decision. Meanwhile, Karan has cast two actors of Takht, Ranveer Singh and Alia Bhatt, in another film based on his love story.