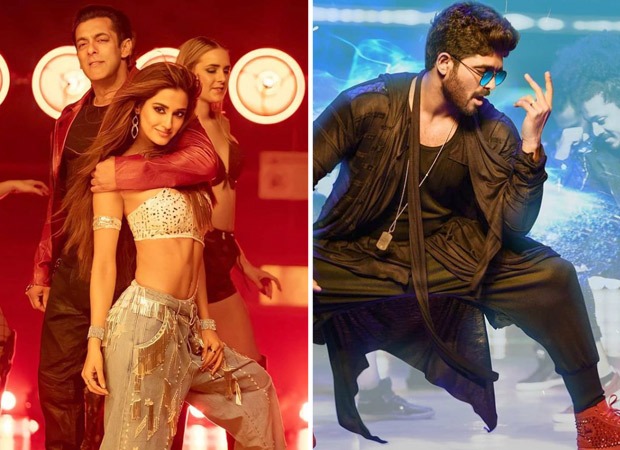 Ever since the trailer release of Radhe: Your Most Wanted Bhai, the song ‘Seeee Maar’ has been making headlines and the track has been the talk of the town for its release on social media. So today, Megastar Salman Khan has released the much awaited dance number and keeping in mind the track record of Salman’s iconic songs in every film, Whistle Maar is already on its way to become the biggest chartbuster of the year. The song has been sung by Kamal Khan and Iulia Vantur and the lyrics have been penned by Shabbir Ahmed. The music for the track has been composed by Rockstar composer Devi Sri Prasad (DSP), who has previously collaborated with Salman in the sensational hit Dhinka Chika.

Actually Radhe’s song whistle maar is a recreated version of hit song from a Telugu film by Allu Arjun released in 2017 and since Salman is seen in this version, he has thanked Allu Arjun for whistle maar. Interestingly, Allu Arjun has also said thanks in response to this.

Thank u Allu arjun for seeti maar absolutely loved the way u have performed in the song, the way u dance, your style, u r simply fantastic.. tk care n b safe. Rgds to ur family .. love u brother alluarjun#SeetiMaar https://t.co/St8cWOmNKX

With the signature dance style of Salman Khan, his pairing with the current favorite of the youth, hot and beautiful Disha Patani, Shaikh Jani Basha popularly known as Jaani Master, choreographed by him and directed by Prabhudheva, made the audience in City Maar. There is every quality of making a splash. Jaani Master and Prabhudheva present a fine blend of hip-hop with classic south style choreography. Also, both Salman and Disha have exceeded all expectations with their sensational chemistry and scintillating dance moves that you will not be able to stop yourself from grooving to. Whistle Maar’s hook step is enough to grab everyone’s attention, and with Salman Khan’s hook step, it is going viral right now. After watching the trailer and the song, it looks like the audience will be entertained with a huge feast on Eid this year.

Along with Salman Khan, the film also stars Disha Patani, Randeep Hooda and Jackie Shroff in pivotal roles. Radhe: Your Most Wanted Bhai is presented by Salman Khan Films in association with Zee Studios. Produced by Salma Khan, Sohail Khan and Reel Life Production Pvt Ltd, the film will release on May 13 this year on the occasion of Eid. The movies can be watched on Zee5 on Zee Plex, a ‘pay-per-view’ service. Gplex is also available on DTH platforms like Dish, d2h, Tata Sky and Airtel Digital TV.