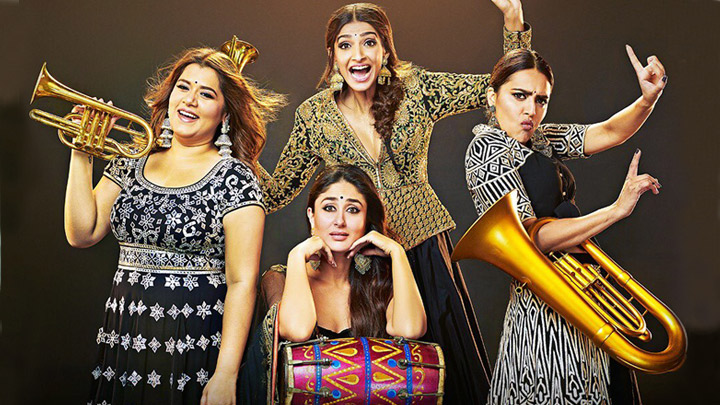 Bollywood has so far seen many films based on bromance. But there are very few films that are woven around our beautiful girls. Will women-oriented films, in which the girl-gang like to openly talk about their problems and live their lives in a bold way, will be liked by urbanites and cine-goers? So Sonam Kapoor and her producer sister Rhea Kapoor took up this challenge with great impunity and came up with the film, Veere Di Wedding with Kareena Kapoor Khan, Swara Bhaskar and Shikha Talsania. Veere Di Wedding, which released this week, has an interesting story woven around these four friends. So will this film manage to entertain the audience, or does it fail in its endeavor, let’s review.

Veere Di Wedding is the story of four female friends at a precarious age. Kalindi Puri (Kareena Kapoor Khan), Avni (Sonam Kapoor), Sakshi Soni (Swara Bhaskar) and Meera (Shikha Talsania) are close friends. Avni is set as a lawyer seeking divorce after studying law but her mother (Neena Gupta) believes that she is not worthy of anyone until her daughter gets married. Sakshi is married but there is a problem in her marriage too. Meera is married and has a child but she is not happy with her husband. Kalindi is dating Rishabh (Sumit Vyas) and their relationship is going well. One day Rishabh proposes to Kalindi for marriage. Kalindi says yes but she gets scared at the name of marriage. Her wedding preparations start in full swing but she remains very upset. All three of Kalindi’s friends, who are struggling with their respective life problems, attend the wedding. What happens after this, it is known only after watching the whole film.

The story of Mehul Suri and Nidhi Mehra is very relatable and raises some important issues regarding marriage, relationship, friendship, broken families etc. But Mehul Suri and Nidhi Mehra’s screenplay fails to do justice to the story. The script of the film is very disturbing and due to this the audience is unable to connect with the film. The film is full of subplots and all of them are shown in 125 minutes.

Mehul Suri and Nidhi Mehra’s dialogues are quite adult and were showered with derogatory language. At times they are quite funny and funny but at other places they are forced to be inserted and as if they have been added just to make an impact. Thankfully most of the dialogues have been retained by the censor board.

Veere Di Wedding rests on interesting characters and good ideas. But it’s not entertaining at all. The direction of this film becomes the biggest drawback of this film. The execution of the film is very weak and it hinders making an impact. The introduction of the characters in the film is very good and the wedding preparations are very relatable. After the interval, the Thailand scene is quite good. The climax scene could have become a high point for the film but it is not the case.

Shashanka Ghosh’s direction is the biggest drawback of this film. The film just gives an overview and does not allow viewers to enter into Veere’s life. That is, this film does not entice the audience. Apart from this, there are many such scenes in the film which are surprising such as the arrest of Rishabh’s father (Manoj Pahwa). This scene is not executed in the desired manner.

The chemistry of all the four actresses of the film is excellent and looks good. It is difficult to say whether the performance of such an actress is good enough or their chemistry looks good in the film. Kareena Kapoor Khan gives excellent performance. She seems engrossed in her role and portrays a character that involves unabashedly wedding preparations. Sonam Kapoor Ahuja leaves an indelible mark but the other cast, overpowers her. Swara Bhaskar is terrific and her performance will definitely become a topic of discussion. His superb dialogue delivery is worth watching. Shikha Talsania looks very natural. Sumit Vyas looks very cute. Vishwas Kini (Bhandari) plays the troubled character well. Neena Gupta is decent. Vivek Mushran (Cookie Uncle) and Anjum Rajbali (Kishan) are fair. Manoj Pahwa is a spirited spirit while Ayesha Raza (Rishabh’s mother) makes an impact. Ishwar Singh (Nirmal) is apt for his role. Ekvali Khanna (Paromita) brings a laugh. Edward Sonnenblick (John) is fine.

The songs of the film are very well intertwined in the story of the film. Surprisingly, the film’s chartbuster song ‘Tareefan’ is missing from the film. ‘Pappi Le Lun’, ‘Bhangra Ta Sajda’ and ‘Aa Jaao Na’ are played in the background. “Dagmag Dagmag” is played to give the opening credits whereas, ‘Veere’ makes a big impact. Arijit Dutta’s background score is quite good.

Sudhakar Reddy Yakanti’s cinematography is poor. There are too many close-ups that take away the charm from several scenes in the film. Shweta Venkat Mathew’s editing is quite sharp. Priya Ahluwalia’s production design is rich. Rhea Kapoor, Abu Jani- Sandeep Khosla’s costumes are quite bold and attractive.

Overall, Veere Di Wedding is a bold themed film that breaks stereotypes and surprises. This film at the box office, multiplex audience and youth [विशेष रूप से महिलाएं] will attract massive Watch this movie to see the fun and craziness put on by the four lead actresses.