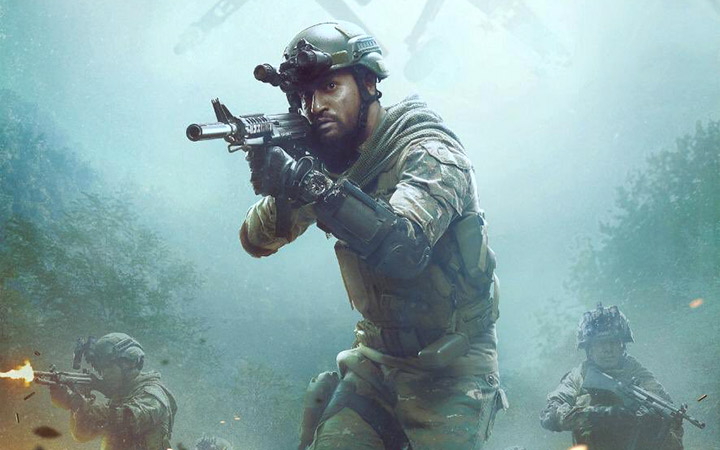 The new year has started and everyone expects that this year will be better for Bollywood than last year. While big budget and big starcast films went awry in the year 2018, a lot is being expected from Bollywood films in the year 2019. In September 2016, India avenged the Uri attack from Pakistan by crossing the LoC and the film Uri: The Surgical Strike released in theaters this week. Let’s review how this film lives up to its authenticity, adorned with the performances of Vicky Kaushal, Paresh Rawal, Yami Gautam, Kriti Kulhari and Mohit Raina.

Uri: The Surgical Strike is based on true events of the surgical strike carried out by the Indian Armed Forces after the Uri attacks in September 2016, which was described as one of the deadliest attacks on Indian forces. The film begins with a depiction of Indian soldiers ambushed in Manipur, followed by retaliation against terrorist positions on the Indo-Myanmar border in the northeast. After this the story of the film moves forward and Major Vihaan Shergill (Vicky Kaushal), whose mother is suffering from Alzheimer’s disease and due to her deteriorating health, wants to take retirement from her job. Meanwhile, the Pakistani terrorist organization carries out an attack on the Uri Army Base Camp in Kashmir. Vihaan’s childhood friend and brother-in-law Captain Karan Kashyap (Mohit Raina) along with some of his other army mates is martyred in the attack. Thereafter, Vihaan is inspired to avenge this attack by leading the strike force. Vihaan himself forms a team to conduct surgical strikes under the guidance of PMO bigwig Govind Bharadwaj (Paresh Rawal) with special orders from the PMO (Rajat Kapoor). Special Agent Pallavi (Yami Gautam) helps Vihaan to find out the location of the launch pad and the details of the target. After all, how this surgical strike was carried out, it is known after watching the whole film.

Written and directed by Aditya Dhar, Uri: The Surgical Strike, which is similar to the Hollywood film Zero Dark Thirty, is based on a true covert military operation. However, unlike the Hollywood film, which was based entirely on true events, telling what actually happened during the operation, Uri is largely fictional. However, Uri tries to keep the audience hooked to its story. First time feature film director, Aditya Dhar has done well in keeping the on-screen proceedings tidy and tidy. Aditya has tried his best to make the film gripping to the seat and it enthralls the audience to a great extent. While the first half keeps the story set in the film, the second half is devoted to the actual surgical strikes and action sequences.

Talking about the writing, while the first half is a balanced mix of story, drama, emotions with action, the second half is completely dominated by action. The inclusion of a dramatic or emotional track in the second half could have enhanced the overall impression of the film, as well as grabbing the audience’s attention and giving them a break from nonstop action. But since the incident is based on real life, Indian audiences already have anger against what happened in Uri, and so this flaw is covered in the script when action sequences showing attacks on terrorist launch pads in Pakistan begin. Huh . Also in the second half of the film, you would think that, as a writer, Aditya Dhar could have paid more attention to the script, and researched what happened after the strike. The entire Garuda drone concept seems a bit gimmicky and incomprehensible.

Talking about acting, Vicky Kaushal made his debut in the year 2012. Vicky Kaushal has secured the place of a talented actor in Bollywood after delivering stellar performances in films like Sanju, Raazi and Masaan. Like every time, this time too Vicky does not disappoint with his performance in Uri. His methodology as an officer of the Armed Forces, completely focused on one goal, is splendid. His excellent performance and rigorous training to fit into his role is visible on screen. Yami Gautam as Pallavi/Jasmine has been heavily outlined as a special agent. Similarly, Kirti Kulhari as Seerat Kaur has also been cast in a subtle role. Paresh Rawal as Govind Bhardwaj, Mohit Raina as Major Karan Kashyap, Yogesh Soman as Ravindra Agnihotri and Rajat Kapoor as PM Narendra Modi perform well in their roles. Mohit Raina deserves a special mention here as he has done an extraordinary job. On the other hand, the portrayal of Paresh Rawal’s character breaking the cell phone again and again seems incomprehensible and unfortunately no reason has been given as to why he does so.

In terms of music (Shashwat Sachdev), there is not much to expect. The five songs, all of which are situational, do not contain any chartbuster songs. However, the background score (Shashwat Sachdev) is well executed, and the climate helps to create extremes during the scenes. The action sequences are very well choreographed and are the backbone of this film.

Cinematographer Mitesh Mirchandani does a good job, especially during the action sequences. The editing by Shivkumar Panikkar is crisp and keeps the film understandable.

Overall, Uri: The Surgical Strike is a thrilling and gripping story that creates patriotism without delving into nationalism. The film will mainly attract multiplex audience at the box office.