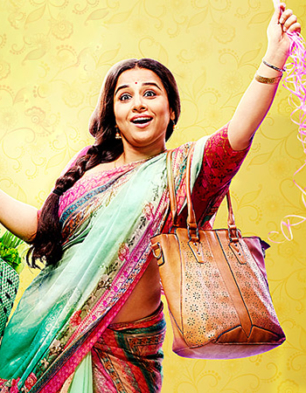 Five years ago, Gauri Shinde made her directorial debut with the English Vinglish film, which narrated the wonderful story of an enterprising housewife. It is surprising that there are lakhs of such women in India, but very few films have been made on them. Suresh Triveni took up the challenge of depicting the ambitions of a housewife in the film Tumhari Sulu. But unlike English Vinglish, Tumhari Sulu is a light-hearted fun film. So does this film manage to touch the audience and bring a smile to their faces or does it disappoint? Let’s review.

Tumhari Sulu is the story of an enterprising housewife who becomes an RJ for a late night semi-adult radio show. Sulochana (Vidya Balan) is a housewife living in Mumbai and her husband is Ashok (Manav Kaul) and they have a son Pranav (Abhishek Sharma). Sulochana has a desire to do something in life and she doesn’t want to waste her time just serving the family. One day, she wins a pressure cooker in a radio show hosted by the popular RJ Albeli Anjali (Malishka Mendonsa). Sulochana goes to the radio station to pick up her cooker and there she learns that they are looking for RJ for a radio show. She contacts Maria (Neha Dhupia) who runs the radio station and tells that she is interested in this job. Maria offers him a late night slot and Sulochana is asked to run a semi-adult show. Sulochana starts working as an RJ and her show becomes a hit show. After this, what problems and madness comes in Sulochana’s life, it all comes to know after watching the rest of the film.

Your Sulu is beautifully crafted and instantly sets a mood. The film is reminiscent of Hrishikesh Mukherjee and Basu Chatterjee cinema and that is a plus point. However, after the introduction of the main characters, the interest level and pace slow down. The first half is devoid of major portions. Interest in the film awakens when Sulu decides to become an RJ and audition. The second half turns out to be excellent as Sulu successfully runs the late night show. The manner in which Sulu manages the job along with running her household is depicted very well. Also, the way Sulu is taunted by his sisters is actually very real. However, the pace of the film is very slow and it really affects the effect. Also, the sudden success of Sulu’s show looks a bit unreal. This 140 minute long film could have been 15-20 and shorter. The climax is vague and should have been a bit simpler. However, the last scene makes up for it.

Vidya Balan is the soul of the film and she takes the film to a different level altogether. This is his most accomplished work after the story and has the power to impress everyone. As the well wishing housewife, she gets into her character and plays her role with utmost gusto. Manav Kaul looks quite dashing and matches Vidya Balan well. He plays an interesting role and gets his job done successfully. Neha Dhupia looks glamorous and does a good job. Vijay Maurya (Pankaj) is fun in the first half. Though he doesn’t have much to do in the second half but still he leaves a mark. Abhishek Sharma is good. Malishka Mendonsa looks overbearing in a cameo. Ayushmann Khurrana is seen in a scene and looks cute. Seema Taneja (Sulu’s sister Aradhana) and Sindhu Shekharan (Sulu’s sister Kalpana) look great. Sonal Singh (receptionist Girija) makes an impression especially in her first scene. Santanu Ghatak (Sachin, Ashok’s new pace) delivers a believable performance. Bhumik Dubey (gym receptionist) is fine while Trupti Khamkar (Ola Driver) plays a wonderful character and one that is memorable.

Coming to the songs, ‘Hawa Hawai 2.0’ is really fun and well shot. The second song which is good is ‘Ban Ja Rani’ which gives a genuine and lovely feel. ‘Farrat’ seems a bit awkward especially the shots of B-boying. ‘Rafoo’ is soulful but gets a little lost.

Overall, Tumhari Sulu is an enjoyable, lovely film but the lengthy length and slow pace of the film can spoil the fun.