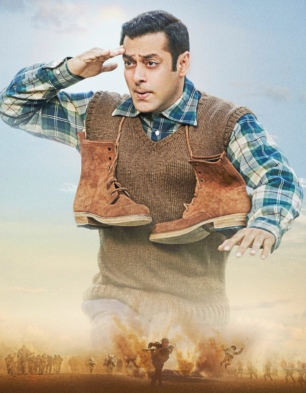 Apart from Salman Khan’s unique presence in films like Bajrangi Bhaijaan, Kick, Ek Tha Tiger, Bodyguard, Dabangg and Wanted, all these films were released during the Pak festival of Eid. Till now, every Eid has become synonymous with Salman Khan’s film releases. And taking forward the same tradition, this year also Salman Khan’s film Tubelight is released on the day of Eid. Tubelight is an official adaptation of Mexican filmmaker Alejandro Gómez Monteverde’s war film Little Boy. Will Tubelight shine at the box office or break new records, let’s review.

Tubelight is the story of one man’s unwavering faith. Based on the proverb ‘Faith makes even a rock move’, the film revolves around the life of Laxman Singh Bisht (Salman Khan), who leads a simple life. Due to his very forgetful nature and inability to understand, explain and analyze things like others, he gets the name ‘Tubelight’. The film begins with the introduction of Laxman where he takes the audience from his childhood to adulthood. Even though the world doesn’t take him seriously, there is one person who always stays with Laxman and has full faith in him, and that is his younger brother Bharat Singh Bisht (Sohail Khan). One day, in the wake of the Indo-China war, the Indian Army invites young Indians to join the army and serve the country in times of crisis. Both brothers go to the army entry process but Lakshman is rejected and Bharat is selected. Bharat is selected as a part of the Indian Army to go to the border to fight a war against the Chinese army. Lakshmana is devastated when he learns that there is no contact with Bharata and that he may have died in the war. Then Beni uncle (late Om Puri) tells Lakshmana to have faith that his brother Bharat will come back. Whether Laxman Singh Bisht’s faith survives the test of time, whether Bharat Singh Bisht is able to return home safely, and what ultimately happens to the Sino-Indian War, all this is known only after watching the film.

The promos of Tubelight had piqued everyone’s curiosity for the film, but the film fails to live up to its title and eventually falls completely on its face. The story of the film (Kabir Khan) is raw, extremely under-cooked and utterly complicated. The film’s screenplay (Kabir Khan, Parvez Shaikh) is too smooth and rests on a very light story that is pulled forcefully, and thus, spoils the novelty of the film in a big way. The script seems to have been made comfortable instead of binding. Even though the film is based on the popular proverb ‘Vishvas se toh rock bhi shake hai’ but Tubelight does not appear to have any solid content which would prove this saying in favor of the film. The film is not strictly made in the context of the war backdrop and does not connect emotionally with the audience. The film’s dialogues (Manurshi Chaddha) are almost average and unlike a typical ‘Salman Khan film’.

Director Kabir Khan, who started his career with documentary films, gradually progressed in Bollywood with films like Kabul Express, New York, Ek Tha Tiger, Bajrangi Bhaijaan and Phantom. Known for his distinctive style of filmmaking and his stellar performances from the cast, Kabir Khan was expected to continue the same tradition in Salman Khan’s Tubelight. But sadly, this time he disappoints. Though Kabir had a very interesting premise, he still fails to adapt it into a gripping entertaining film. Although the first half of the film was quite good, the second half of the film progresses at a very slow pace with no story. Although there are many elements in the film that were undermined and that are the cinematic freedom, some emotionless scenes that were forcefully drawn in the second half.

Talking about the scenes worth watching, the scenes you absolutely must not miss are the one when Salman Khan goes through the entry process to join the army and Shah Rukh Khan’s cameo along with the same.

After delivering some of the best super-duper hits like Kick, Bajrangi Bhaijaan and Sultan, the expectations were high from Salman Khan’s Tubelight. Salman Khan plays his character with utmost honesty and dedication but weak script makes his hard work go in vain. Though Salman Khan tries to be naive and friendly, the film’s poor writing fails him. That’s exactly what happens with Chinese actress Zhu Zhu, who made her Bollywood debut with Tubelight. Though his presence in the film looks good, the weak script spoils his performance. Indian audience will not be able to connect him with his half-baked character in the film. While younger star Matin Ray Tangu suits his character and looks very cute too but he doesn’t have much to do in the film. Sohail Khan, on the other hand, suits his extended cameo role quite well and plays his character quite honestly. While late actor Om Puri gave his memorable performance, Shah Rukh Khan’s cameo was also very impressive. Rest of the characters contributed in taking the film forward.

Tubelight’s music (Pritam) is very average. The song ‘Radio’ is the only chartbuster in the film. On the other hand, the background score of the film (Julius Packham) is good.

The cinematography (Aseem Mishra) of the film is excellent. The way he has shot the location is really commendable. The editing of the film (Rameshwar S Bhagat) is good.

Overall, Tubelight turns out to be a huge disappointment and fails to grab the attention of the audience due to its weak storyline. The film will open well at the box office on the star power of Salman Khan and will see a huge jump on weekends and during Eid holidays, but after that, there will be a huge drop in its earnings.