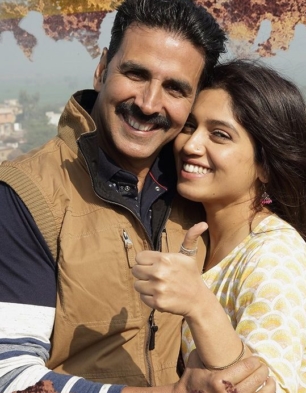 Our country is far behind in terms of cleanliness. Lack of toilets can be seen in every corner of India. It is very sad to see people going out in the open to be light. But for women it is even more difficult for good reasons. And the shameful thing is that women from small towns and villages are raped and sexually assaulted only when they go out in the open to retire. Toilet – Ek Prem Katha throws light on this aspect and also weaves a love story around it. So does this social drama manage to make the required impact or it fails, let’s review.

Toilet – Ek Prem Katha is a love story of a man who fights with the system and his family to install a toilet in his house for the sake of his wife. Keshav (Akshay Kumar) lives together with his father (Sudhir Pandey) in the village of Mandgaon in North India. He falls in love with Jaya (Bhumi Pednekar) and she too falls in love with Keshav. Both get married. Jaya would not have known that there is no toilet in Keshav’s house. On the first day after marriage, she is a part of a ‘lota party’ of women from the neighborhood who go out for open defecation before sunrise. Jaya gets angry and demands for a toilet to be built in the house. But Keshav’s father is strongly against it. And he argues that he will not allow anyone to defecate in the house, because it is against their culture. What challenges does Keshav face to get the toilet constructed and how he fights against the system, all this is known only after watching the rest of the film.

The first scene of Toilet – Ek Prem Katha, which depicts the bondage of women during the filming, sets the mood of the film. Akshay Kumar’s entry is sudden and the scene serves no purpose for the rest of the film. The chase scene is a bit offensive, but keeping the small town element in mind, it works. Jaya-Keshav’s marriage takes place suddenly, but the film takes a turn when Jaya learns that there is no toilet/toilet in her married house. Interval is a very important place which takes the film to another level. The second half is special in itself. The scene, when Jaya calls women shameful for not standing up for their rights and Keshav gets furious for destroying her toilet, is very memorable. On the other hand, the film gets quite long and it should have been reduced to at least 20 minutes. Some scenes were really impossible. The greatest extent is when, ‘Lota Party’ women suddenly rebelled against their husbands.

The story of Garima Wahal and Siddharth Singh tries to balance a love story with a social problem that is afflicting the country. Garima and Siddharth’s script moves at a slow pace. The manner in which Keshav goes to great lengths to build a toilet for Jaya is quite entertaining. But there was also a need for a sharp story. Also, in the second half, the film becomes didactic and becomes a pro-government film, which could have been avoided. Still, the seven captivating scenes deserve praise. Garima and Siddharth’s dialogues are sharp and witty. The urban audience might feel embarrassed at the repetitive words like ‘sandas’, ‘pouch’ etc., but there was no other option. But without them this film would not have been able to make its impact.

Shree Narayan Singh’s direction suffers to an extent. The film is very fast in many places – like, Jaya-Keshav’s marriage happens in a jiffy and the audience doesn’t even understand. But in the second half, it drags a lot. It cannot be denied that some scenes have been cleverly reinforced. One of them is the scene, which really impresses, when the brahmin father is forced to take a bath before the climax.

Akshay Kumar is a revelation. For the past few years, he has been playing well-written roles, but in Toilet – Ek Prem Katha, he rises to the heights. The way she has reacted in the mentioned stunner scene has left the audience stunned. Bhami Pednekar gives a great performance. She seems to be very confident and understanding. Divyendu Sharma (Naru) brings a comical feel to the film and looks amazing as Akshay Kumar’s brother. Sudhir Pandey suits as a strict father. Anupam Kher (Jaya’s uncle) also brings in laughter, but his part is no laughing matter. He plays an important role in the film. Shubha Khote (Keshav’s grandmother) is especially good before the climax. Rajesh Sharma (DM Mathur), Mukesh Bhatt (journalist Rastogi) look quite good in their small roles of sarpanch and female journalist. Sana Khan goes in vain.

The music of the film is not memorable. ‘Hans Mat Pagli’ is about to climb to a certain extent in meditation. ‘Gori Tu Lath Maar’ has been shot well. ‘Bakheda’ and ‘Morning Train’ are just fine. Surinder Sodhi’s background score is encouraging at many places.

Overall, Toilet – Ek Prem Katha, despite some shortcomings, delivers a strong social message with entertainment and also questions many age-old practices in the society. At the box office, the film, as there is no other film in front of it, holidays next week and tax exemption in some states, will be able to garner audiences.