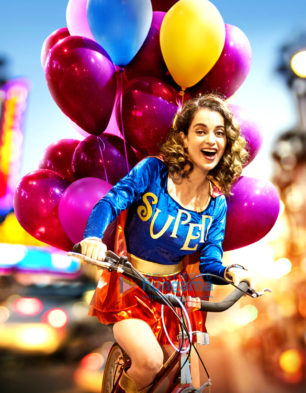 The introduction of a criminal-minded child into a decent family, whose generations have never committed a crime, is an interesting idea that could make a good film. After all, our upbringing plays a major role in shaping our personality, but sometimes, it can have a different effect on someone. Hansal Mehta, who is known to try on novel themes, took up the challenge and created Simran. It is inspired by a true incident which also raises the level of curiosity. So will this Hansal Mehta film do justice to this unconventional theme or will it prove to be a bad attempt, let’s review.

Simran is the story of a girl who resorts to crime when bad things happen in her life. Praful Patel (Kangana Ranaut) is a divorced woman and lives in Atlanta in the United States of America. Disturbed by the remarks of her parents (Hiten Kumar, Kishori Shahane), she decides to move into her own house. She even gets the loan approved for her house. One day he gets a chance to go to Las Vegas with his cousin Amber and his life changes there. After her initial win at the casino, she loses a lot of gambling money which includes her savings. Still she continues to play this game. For this she also borrows $32,000 from the lenders but she loses that too. The lenders are very dangerous and threaten him with dire consequences if he does not return their money with interest. Now she is left with no option and Praful starts robbing the bank. Due to all this, what problems come in his life, it is known only after watching the rest of the film.

The story written by Apoorva Asrani, which is said to be inspired by a true incident, rests on a weak axis. Apoorva Asrani’s screenplay is very flawed and inconsistent. There is no related factor of any kind with the lead character and this is the weak link of the film. Apoorva Asrani’s dialogues (additional dialogues penned by Kangana Ranaur) though fine but nothing memorable.

Simran starts off quite well. The first 10-15 minutes go into the introduction of the characters and the Las Vegas scene and it’s a pleasure to watch. But as soon as Simran becomes a habitual gambler, the film starts slipping and then doesn’t pick up the pace again. His action sequences are irrational and after a point it becomes disturbing as to what is going on in the film. No one feels sympathy for Praful. She doesn’t look badass in the slightest if the makers intend to show it. Also, there is too much English and Gujarati in the film which dilutes the commercial element of the film. The film has a lot of cinematic liberties, which take the audience lightly. Even in many scenes the voice is not heard properly and hence some of the English dialogues are also not audible. The signal turns out to be the show reel for Kangana Ranaut – notice how she is engrossed in every scene.

Hansal Mehta’s direction is disappointing and it is not even close to his earlier films like Shahid, Citylight and Aligarh. Although some scenes are shot quite well by him. Must watch the scene where Praful’s father watches the news on TV and criticizes Simran’s father, not knowing that he is insulting himself. All these scenes are very funny.

Kangana Ranaut has done a good job but her performance is quite inconsistent and feels lost in herself. Note that his Gujarati accent goes missing in several scenes – so we don’t expect such silliness from a powerhouse performer like him. Sohum Shah’s (Sameer) performance is not funny as his character is not portrayed well. In the middle of the film, he completely disappears. Hiten Kumar is very loud and dramatic. He should have controlled his performance. Kishori Shahane is much better. Esha Tiwari (Salma) is fine in her small role. Amber, Mike, the bartender, the lender and his henchmen are all fine in their respective roles.

Sachin-Jigar’s music as a whole is forgettable. Only its title song is good. ‘Lagdi Hai Thai’, ‘Pijra Tod Ke’, ‘Meet’ and ‘Maja ni Life’ are not memorable.

Anuj Rakesh Dhawan’s cinematography is satisfactory. Tia Tejpal’s production design is nothing special. Antara Lahiri’s editing is nothing special, but with such a script and direction, she could have done nothing.

Overall, Simran is a film that can easily be skipped without any regrets. The film will be quite average at the box office. Watch this movie only if you are a fan of Kangana Ranaut.