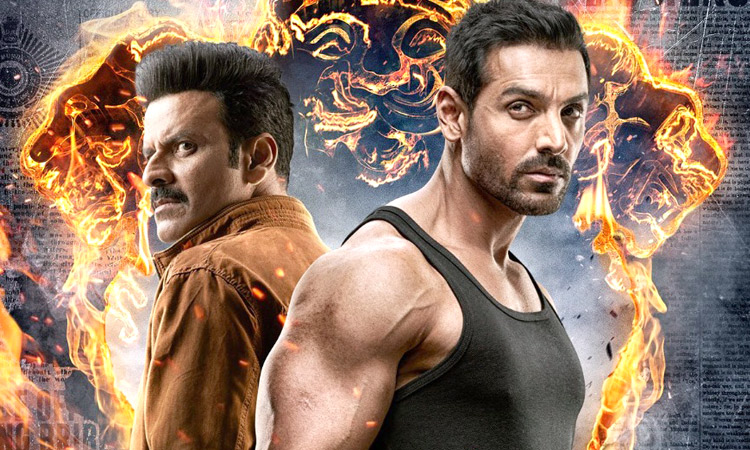 We all have seen many types of corruption and apathy in the government and police force. Many times we succumbed to corruption and did not take any action against it. This issue is often raised in films as well. But imagine if you teach a lesson to these corrupt officials. Milap Zaveri’s film Satyamev Jayate, which released this week, raises a similar voice against corruption. So will Satyamev Jayate be action packed, powerful and satisfying as per its trailer, or will it fail in its endeavor, let’s review.

Satyamev Jayate is the story of a man who commits murders for personal reasons. Veer (John Abraham) is an acclaimed artist who takes up a mission to kill corrupt cops. His first target is Sadashiv Patil (Abhishek Khandekar). He sets her on fire alive and then sends her ashes to his police station in Santacruz, Mumbai. And soon after, he similarly murders Inspector Irfan Qadri (Sheikh Sami Usman) of Andheri Police Station. DCP Shivansh Rathod (Manoj Bajpai) gets the charge of handling the case by his commissioner (Manish Choudhary). Meanwhile, as part of a beach clean-up drive, Veer meets Shikha (Ayesha Sharma) and the two fall in love with each other. Meanwhile, Veer challenges Shivansh to show that he has the guts to stop him from reaching his next goal. Shivansh is unable to stop him and meanwhile Veer manages to eliminate Inspector Damle (Ganesh Yadav) of Thane police station. Shivansh is shaken by this courage and fearlessness of Veer and starts to find out who his target is. In the end, Shivansh gets to know Veer’s working method. Shivansh learns that Inspector Bhonsle (Rajesh Khera) from the Yari Road police station is Veer’s next target. And then Shivansh lays a trap to catch Veer red handed. What happens after this, it is known only after watching the whole film.

Milap Milan Zaveri’s story is simple, expansive and one that people will love. Milap Milan Zaveri’s script is also on the same line but it is repeated. There seems to be no novelty after a point regarding the police killing. Also it is a bit flawed. For example, it was a bit convenient for Veer to give all the clues through his paintings. The climax of the film is a bit confusing especially, Shikha’s action. The dialogues of Milap Milan Zaveri are completely paisa vasool and will be greeted with whistles and applause.

The Milap Milan Zaveri directorial is reminiscent of the action dramas of the 90s. Though it works for most of the parts, at some places the film starts giving a dated feel. In the second half, he could have executed the killing sequence differently, which would have fueled the interest of the film. Also, the film does get a bit stretched towards the final, perhaps this aspect could have been avoided.

Satyamev Jayate begins with a bang and the excitement continues till later. The entry of DCP Shivansh adds fun to the story of the film. Veer’s first call to Shivansh is a very dramatic scene. The manner in which the three cops are pulled out is quite interesting and the audience will surely be thrilled to see these scenes. But the best scene of the first half is that of ‘Nawaz’. Single screen viewers will be stunned to see this scene. The interval comes like a thunderstorm. After the interval, the hospital scene is funny. But after that the film becomes very dramatic and repetitive. Even the final scene of the film will get mixed response.

John Abraham delivers a superb, nuanced performance. John is primarily known for his action avatar and his role in Satyamev Jayate is definitely the best when compared to his earlier films like Force 2, Rocky Handsome and Dishoom. When he works smartly in the hospital scene, he is worth watching in that scene. Manoj Bajpayee supports her quite well and enhances the impact of some scenes. His confrontation with Veer at various points is great. Ayesha Sharma makes her confident debut but she doesn’t have much to do in the film. Amrita Khanvilkar (Saritha) has become a complete waste and it is unfortunate considering that she gave a memorable performance in the film Raazi. Manish Chaudhary looks good but acts unusual in the climax. Rajesh Khera leaves the most impact among all the police officers. Ganesh Yadav comes after this. Abhishek Khandekar, Sheikh Sami Usman and Ankur Sharma (Inspector Mohan Srivastava) are fine. Chetan Pandit (Inspector Shiv Rathod) leaves an impression. Archana Aggarwal (Muslim girl tortured by police) has good screen presence. Nora Fatehi looks and dances like a dream and looks quite sizzling.

The songs didn’t have much purpose in this film. ‘Dilbar’ is the best of all the songs and it is pictured in the best way. ‘Paani Sa’ is not that impressive while ‘Tejdar-e-Haram’ is played in the background. Sanjoy Choudhary’s background score is dramatic and exhilarating.

Nigam Bomzan’s cinematography is decent while Priya Suhas’ production design is a bit poor but works well for this film as it is based in a realistic setting. Amin is the life of the action film of Khatib and Ravi Varma. It’s not too bloody but at the same time it gives a sense of reality and romance. Milap Zaveri’s editing should have been crisper.

Overall, Satyamev Jayate is a powerful and engaging film. This film, highlighting the problems of the common man, leaves a strong impact. It is true that the film will do exceptionally well on a single screen and many of its scenes will get applause and whistles. People will definitely like this.