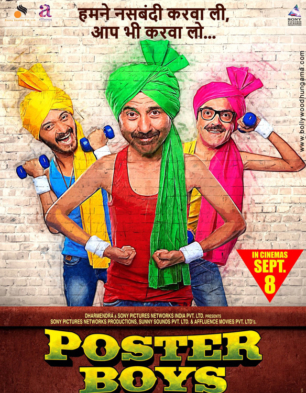 The 2012 film Vicky Donor proved that making a film on a taboo/taboo or uncomfortable subject can be a win-win, which is widely appreciated. Inspired by the success of this film, some films, such as Piku (depicting constipation) and the recently released film Toilet-Prem Katha (open toilet) and now Shubh Mangal Zyada Saavdhan (masculine weakness) have also addressed similar issues. Shown and was well appreciated. Poster Boys is also one such film which depicts the issue of sterilization. Will this film be able to become a huge entertainer like its predecessors or will it fail to entertain, let’s review.

Poster Boys is the story of three people whose lives change when they are not at fault. Vinay Sharma (Bobby Deol) is a humble school teacher, Arjun Singh (Shreyas Talpade) is a high-spirited schoolteacher, while Jagawar Chaudhary (Sunny Deol), a retired army officer, is quite aggressive but has the right attitude. In ways. He lives in Jangethi village and one day, he sees his pictures appear on a poster related to sterilization. From here, all kinds of problems arise in the life of all three. The people of the village start questioning his manhood. He tries to convince everyone that his pictures have been misused but no one listens to him. After this, he decides to take revenge for whatever trouble he has caused to the government. What happens next after this, will they get justice, all this is known only after watching the film.

Poster Boys doesn’t have anything special to start with. The opening part is very dragged, the trio is ridiculed by family members and acquaintances, but the reason why this is being done is not given. TV-style flashbacks are nothing special. The film comes to life when the three meet each other on a bridge. And from here, the film becomes truly entertaining till the end and there are no dull moments. Some of the scenes are really cool like;- Jagawar stopping Arjun and Vinay from fighting, the trio going to the local health office, interval point, Jagawar calling Riya (Trupti Dimir) at midnight, Jagawar and Vinay’s doctor (Ashwani Khalsekar) To make a fool, etc. The climax scene of the film is quite interesting and it is really commendable for the makers to add a social message to the story of the film so well.

Shreyas Talpade’s story is unique and makes it an entertaining film. The screenplay by Bunty Rathod and Paritosh Painter is absolutely effective despite an average start. The fun doesn’t end anywhere in the film and this is a great achievement. The dialogues of Bunty Rathod and Paritosh Painter are funny and laughable and are one of the high points of the film. Shreyas Talpade’s direction is quite good and with this he has made his good debut in the field of direction. He made sure that he simplified the subject so that the audience would not take it lightly. Also, the way he and his team have narrated Deol brothers movies like Damini, Soldier etc. is done very well.

Poster Boys rests on the shoulders of the three main actors. Sunny Deol suits the most and stuns with his action and comic timing. Even at this age, he is quite fit and energetic which is really commendable. Shreyas Talpade is the surprise of the film. His character is very interesting and he manages to entertain well. Bobby Deol seems a bit cold in the beginning, but once he gets into his character, he does not stop. What goes in his favor is his peculiar character. A great comeback, in short! Sonali Kulkarni is fine but she doesn’t have much scope to do. Samiksha Bhatnagar (Surajmukhi) is very loud as her character requires and adds to the joy in the film. Trupti Dimri is good and Ashwani Khalsekar is very funny. Ravi Jhankal (Riya’s father), Murli Sharma (Health Minister) and Sachin Khedekar (Chief Minister) suit their roles. Elli Avram looks very hot in her item song.

Talking about its music, ‘Kudhiya Shahar Diyan’ is a very memorable song. ‘Kendi Menu’ is played during the giving of credits at the end. ‘Noor-e-Khuda’ is not memorable and ‘Poster Boys’ anthem’ is foot-tapping. Amar Mohile’s background score adds a huge touch.

Nigam Bamzan’s cinematography is satisfactory. Devendra Murdeshwar’s editing is simple, but could have been more fun in the initial parts. Somnath Parke’s production design is not good and doesn’t sound appealing. Vikram Dahiya’s action is messy.

Overall, Poster Boys has the power to make you laugh and delivers a social message very neatly. Sadly, the lack of promotions and limited shows coupled with awkward timings turn out to be bad for the film. But the praise for the film will change that.