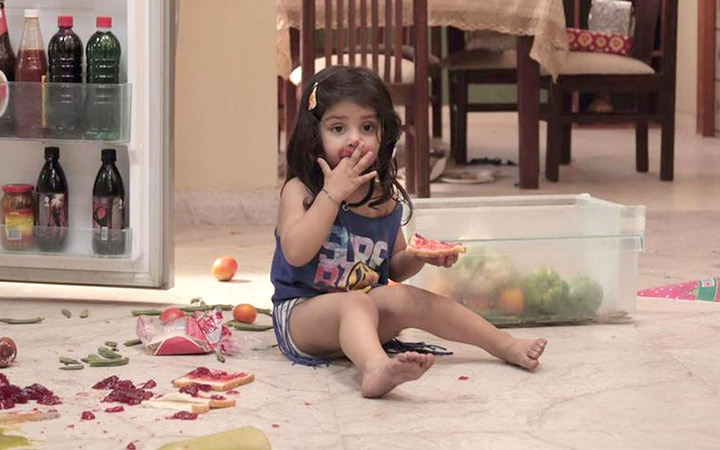 Parents never leave their children alone for fear that their child may unintentionally harm themselves. Vinod Kapri’s film Pihu, which released this week, seems to revolve around this fact. The film actually narrates the story of a child alone in nuclear homes in urban areas with no one to look after, or is left alone for some reason. Interestingly, the film is based on a true incident. So, will Pihu provide the audience with a nail-biting experience or will it disappoint the viewers? Let’s review.

Pihu is the story of a girl who gets trapped in her own house. Pihu (Myra Vishwakarma aka Pihu) turns two and her mother Pooja (Prerna Sharma) and father Gaurav (voiced by Rahul Bagga) throw a party on this special occasion. After Pihu sleeps in the night, there is a big fight between the parents and there have been many big fights between the two in the past as well. The next morning, Gaurav leaves for Kolkata in connection with his work. At the same time, Pooja too, fed up with her married life which seems like a burden, commits suicide by consuming sleeping pills. When Pihu wakes up the next morning, she comes to Pooja’s body and tries to wake her up. However, he does not know that his mother is dead. Meanwhile, Gaurav calls Pooja for some work. Pihu picks up the phone but is unable to speak properly due to her young age. Meanwhile, Pihu gets hungry and goes to the fridge, cooking gas stove to find food for herself. What happens after this, it is known only after watching the rest of the film.

The story of Vinod Kapri is quite novel and interesting and it is surprising that it is based on a true story. There are some flaws in Vinod Kapri’s screenplay. It starts pulling after a while. Ideally, this 90-minute long film should have been reduced to 15-20 minutes. Vinod Kapri’s dialogues are quite natural. Thankfully, subtitles are provided and hence, one can understand correctly what is bothering the child.

Vinod Kapri’s direction is simple and easy. But they should know where to differentiate. He used whatever he found, which diminished the impact of the film. But the film also has some positive sides which are well shot. Like Pihu getting stuck in the refrigerator, where is the smoke coming from in the bedroom and Pihu talking to her father in the second half.

Pihu looks like a very long film as nothing new seems to happen in it. Though the initial 15-20 minutes definitely keeps you busy. The opening credits sync with background noise depicting Pihu’s birthday celebrations. But soon, the film starts to lose its momentum and charm. There have been other films in this genre that have set a benchmark. But Pihu doesn’t even wander around them, that too because of this length. Some scenes in the film seem completely incomprehensible. Pihu’s loneliness is sure to scare the audience which includes Pihu heating roti on gas, television scenes, geysers, microwave scenes. When Pihu, unable to all, goes to the balcony of the house and climbs into the railing, then this scene immediately increases the tension level. But apart from this, there is nothing new in the film. As a result, one can easily guess about the various scary moments shown in the film.

Only two actors play pivotal roles in Pihu and out of which Myra Vishwakarma is the most visible on screen. As expected, Myra delivers a stellar performance. In many places, his looks and gestures look very cute. The director of the film Vinod Kapri deserves praise for getting such a wonderful performance from such a small girl. Prerna Sharma appears as a corpse throughout the film and in which she suits. Rahul Bagga’s voiceover is good but a bit unnatural especially towards the end. Although Rishita Bhatt (voice of Meera) is fine. Other voiceover actors like Angry Neighbor, Doodhwala, Pehredar etc. seem overboard.

Vishal Khurana’s music is a bit like a daily-soap serial, whereas it could have been a bit louder. In some scenes, it’s quite right. Subhash Sahu’s sound designing is very good and enhances the thrill elements. Yogesh Jain’s cinematography is charming. It increases the tension level in the film and gives a dramatic look to the film. Editing by Irene Dhar Malik, Sheeba Sehgal and Archit D Rastogi should have been more slick.

Overall, Pihu is a novel idea film but its length and its incomprehension at some places spoil the whole fun of the film. The very little talk about the film will make it difficult to garner audiences for it.