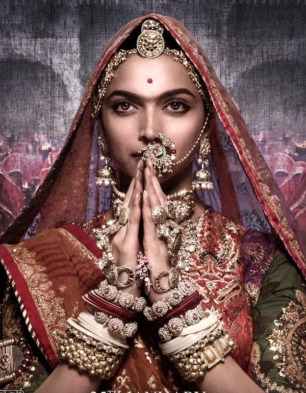 Whatever I wrote about Bajirao Mastani fits perfectly for Padmaavat.

“These are the prerequisites for possessing a mega budget, thorough knowledge of the subject, strong intentions to handle a strong cast/crew, and lastly but crucially, to portray this historical life on the big screen in today’s time. Brilliant vision and patience. You may face immediate disapproval in public or due to controversies and protests for deviating from facts. The filmmaker has to walk a tight rope.”

Padmaavat – Everyone Knows – The film became the headline of newspapers and national news channel headlines in prime time. It is one of the most talked about, debated film of our time. It has benefited greatly from all this – nationwide and internationally – it has raised curiosity significantly. Everyone became curious to see, examine, evaluate Padmavat. The stakes are high and so are the expectations.

The cinematographer in me is fascinated by historical and mythological stories. I have vivid memories of the classics performed by many and famous actors of Indian cinema, such as Sohrab Modi, K Asif and Kamal Amrohi. Ramanand Sagar’s Ramayan and BR Chopra’s Mahabharat – were revered on TV, while Ashutosh Gowariker’s Jodha Akbar and SS Rajamouli’s Baahubali[1 और 2] Refreshed my love for period films.

I am no historian to comment on how authentic Padmavat is, but as a cinematic experience, Sanjay Leela Bhansali’s latest effort mesmerized me. Let’s discuss this: Padmavat is a brilliant film that matches the international standards. And it is not only an amazing film, but it is also a very well made film. The love story, the escalating tension, the conflict that unfolds, the dramatic fights, the fight scenes and the very thrilling climax… Padmaavat brings to life the past life.

last word? Padmavat is not only beautiful on the outside. But there is life in it. Tremendous drama is presented with a great climax. It won’t be wrong to say that Padmavat is Bhansali’s most successful film till date.

When you think of Sanjay Leela Bhansali, the first thing that comes to your mind is the exquisite frames and gorgeous visuals – [याद कीजिए- हम दिल दे चुके सनम, देवदास, गोलियों की रासलीला राम-लीला और बाजीराव मस्तानी] . As I have said, the iconic storyteller has mastered the art of striking the right balance between form and content. Padmaavat will not only be known for its captivating visuals but also for its tight script writing and perfect pace.

Padmaavat proves that Bhansali is capable of executing incredible results while avoiding overs. In the past, the supremely talented narrator lost the chance [सावरिया और गुज़ारिश] …but not this time. The screenplay is focused; This piqued my interest and kept me hooked to the narrative, while the characters in the film are well crafted and portrayed in a powerful manner. In fact, the impeccable screenplay, consisting of drama, action and romance, blends beautifully into the story. In short, everything blends beautifully like a symphony.

Apart from engaging screenplay writing, Padmavat is loaded with strong acting skills. It doesn’t take a crystal ball to predict that Deepika’s role will dominate the awards ceremony next year, but will also win tremendous love and acclaim for her character. She is the lifeline and strength of Padmaavat. This is easily the best work of his career, and it has eclipsed his work so far.

This is Ranveer Singh’s third film with Bhansali. However, his two films with the actor, Bhansali [ गोलियों की रासलीला- राम लीला व बाजीराव मस्तानी ] In Padmavat, you will see him in the treacherous, vicious, scandalous and fearsome avatar of the villain Khilji. Actually, Ranveer has not only played the character of Khilji but has lived it. It is a shocking, spirited performance that will surely create a buzz.

Shahid is tremendous and his work gives seriousness, depth to his character. He sums up his part brilliantly while the camera captures every emotion that comes across his face. I would also like to say that Shahid-Deepika’s chemistry is very natural and attractive.

Notable supporting cast in Padmavat. Jim Sarbh is strictly effective and a master of every scene. Ayam Mehta is superb. Ujjwal Chopra is the best. Aditi Rao Hydari is unforgettable. Anupriya Goenka did not get much scope to do. Raza Murad is awesome.

The composition/soundtrack in Bhansali film cannot be ignored. His music, like the images brought on screen, should have added depth to the emotions of the character, but this time it is strictly fine. In fact, that’s the only problem with it. A movie review would be incomplete without a mention of the war scene.

It is very interesting to watch the climax of the highly thrilled film. The camerawork is wonderfully beautiful and artistic. Production design is top notch. The dialogues are well threaded and the scenes are beautifully decorated.

One more thing: 3D is used in the Hindi film industry in a very bad and disgusting way, and which makes the film fake, but Bhansali is one of those rare storytellers who know very well how to use it for their own benefit. technology and how it can enhance the overall theatrical experience. Watched Padmaavat on IMAX 3D, I can only tell that the results were amazing.

Overall, Padmaavat is a remarkable motion picture experience, backed by masterful direction, mesmerizing screenplay and scintillating acting. For Sanjay Leela Bhansali, this is the best title on an impressive filmography. It’s definitely a winner at the box office!