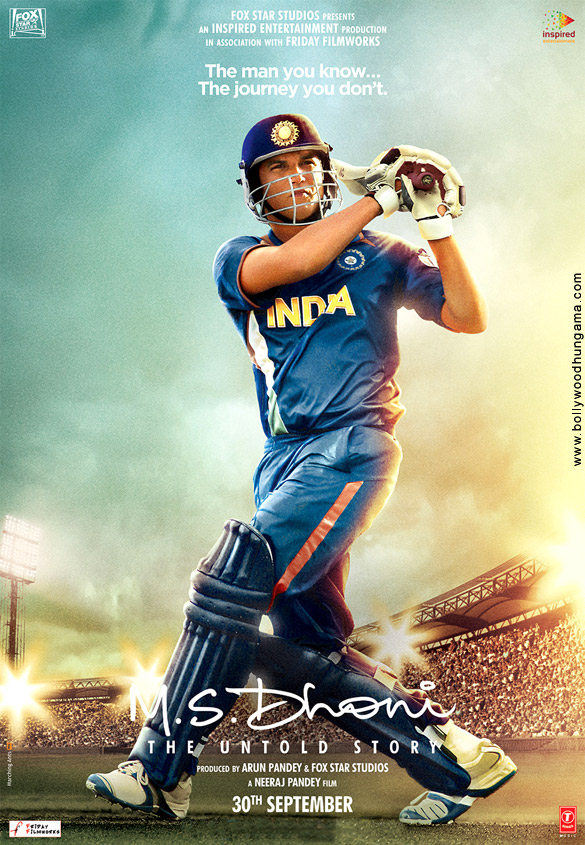 In recent times, Bollywood has witnessed several biopics on sports personalities. Witnesses are Bhaag Milkha Bhaag (based on athlete Milkha Singh), Paan Singh Tomar (based on athlete turned dacoit Paan Singh Tomar), Mary Kom (based on boxer Mary Kom) and many more. MS Dhoni: The Untold Story, a biopic based on the life of Mahendra Singh Dhoni, India’s most successful and popular cricketer, released at the box office this week. Will MS Dhoni: The Untold Story retain its charm amongst the audience and manage to score a big score at the box office, let’s review.

Fox Star Studios film MS Dhoni: The Untold Story As the title suggests, the film is about the untold and unknown aspects of Mahendra Singh Dhoni’s life. The film begins with the iconic match between India and Sri Lanka on 2 April 2011. The film then moves to a flashback where Mahendra Singh narrates the life of Dhoni, who grows up with his passion for football. During a match when his sports teacher discovers his impeccable talent in goalkeeping. At his insistence, Dhoni, initially reluctant, later starts playing cricket. When Dhoni realizes that he is only keeping the wicket and is not getting an opportunity to bat, he creates an opportunity and starts twisting the ball in all directions, thus affecting everyone one by one. does. And then slowly things move forward for Dhoni to play for government organizations.

After that Dhoni becomes TC (Ticket Collector) at Kharagpur station and then starts playing for Railways. As the days go by, Dhoni’s job exhausts him physically and mentally, leaving him with limited time to practice cricket. When the frustration of not practicing the game reaches the height of Dhoni’s mind, Dhoni quits his railway job and returns home, which leaves his father (Anupam Kher) furious and angry. Amidst all this, when Dhoni gets a call from the selectors to play for India. Despite having his first international match, he does not play well on the field. During this he meets Priyanka (Disha Patani) who boosts his morale and Dhoni is back in his form. As Dhoni’s life begins to take flight, professionally and personally, a tragic event takes place that breaks Dhoni. And this time, Dhoni meets Sakshi (Kiara Advani). What was the tragedy that broke Dhoni, what happens when the romance between Priyanka and Dhoni flourishes, what is the role of Sakshi in Dhoni’s life, and under what circumstances did Dhoni make his historic World Cup win? Led India to victory, all this will be known only after watching the film.

Ever since the promos of MS Dhoni: The Untold Story were released, the curiosity about the film increased even more among the audience. The reason for this was that the tagline of the film, which was ‘The Untold Story’, promised the audience that it would reveal untold secrets of Dhoni’s life, whose personal life was very on-screen. The film did not disappoint in any way as it promised.

The fact that works in favor of the film is the title of the film which is absolutely true.

and is more accurate. The film is about the trials, tribulations, challenges, failures and ultimately success of Dhoni, the man who led the country to two big wins each in the T20 World Cup and the One Day World Cup. Unlike other biopics, MS Dhoni: The Untold Story is free from gossip, scandal and rumours. Due to all these feel-good factors, the audience will be very proud to see Dhoni’s life on the big screen and see Dhoni and his achievements. The film is the story of a neglected man who will inspire millions.

The film’s screenplay (Neeraj Pandey, Dilip Jha) is extremely well crafted and inspiring, keeping the audience hooked right from the start. The film does complete justice to the life and lifestyle of MS Dhoni and its screenplay also successfully depicts the rise from a small town to an international star.

After delivering blockbusters like A Wednesday, Special 26 and Baby, one was bound to have high expectations from director Neeraj Pandey. The director lives up to all the expectations. While the director’s flawless direction is seen in the first half of the film, the second half of the film is dominated by Dhoni’s brilliance and Dhoni’s captaincy in T20 and World Cup matches (despite the romantic angle present).

Here, it must also be said that MS Dhoni: The Untold Story had a very weak opening. In other words, this ‘A’ lister was devoid of stars i.e. the film did not have any big stars, a quintessential Bollywood masala script and catchy music. But it cannot be denied that the film was based on the life of Mahendra Singh Dhoni, rather than filling the gaps mentioned above. The place where Neeraj Pandey depicts life in the small town and how so many people have really come to offer his solid support in Dhoni’s progress.

There are many such scenes in the film which touch your heart and leave your emotions shaken. Key among those scenes are Dhoni grinding between exams and match practice, railway recruiting officer Ganguly bowling to Dhoni, Anupam Kher’s constant fear and concern for his son, Dhoni on the road after his girlfriend’s death. Falling in the middle, introducing Yuvraj Singh’s stylish character and the scene where Dhoni misses his flight despite all efforts. Though the film is 3 hours 10 minutes long, it doesn’t look tedious due to its gripping storyline.

On the acting front, the film is entirely and single-handedly associated with Sushant Singh Rajput, who has portrayed MS Dhoni in every part of the film. Though Sushant’s previous film Detective Byomkesh Bakshi was forgettable, Sushant Singh Rajput has now made sure that his role in MS Dhoni: The Untold Story is unforgettable. At many places in the film, you will never feel that Sushant Singh Rajput has actually transformed into MS Dhoni and the film has an actor playing this role. Overall, the film MS Dhoni: The Untold Story will surely be classified as the best role of Sushant’s career. Although Disha Patani made a great debut with this film, Kiara Advani was average in the film. Bhumika Chawla looks good in the film and makes a comeback in Bollywood with this film. The veteran Anupam Kher has played an exceptional role in the film. There are many characters in the film who have given excellent support and made the film real. The viewer gives the casting director a whole number out of full for all this.

While the film’s music (Amaal Malik, Rochak Kohli) is average, the film’s background score (Sanjay Choudhary) is captivating, especially during the film’s climax.

The cinematographer of the film (Santosh Thundiyali) has done a good job. The editing of the film (Shri Narayan Singh) is average.

A special mention should be made to the VFX team of the film who did a good job of applying Dhoni’s body to Sushant’s face during the match scenes in the film, especially in the second half of the film.

Overall, MS Dhoni – The Untold Story hits a tall six due to its engaging storyline and an amazing screenplay. In a country where Bollywood and cricket are religions, the film will set new records at the box office with charisma. Don’t miss this movie for doing anything in the world. Outstanding.