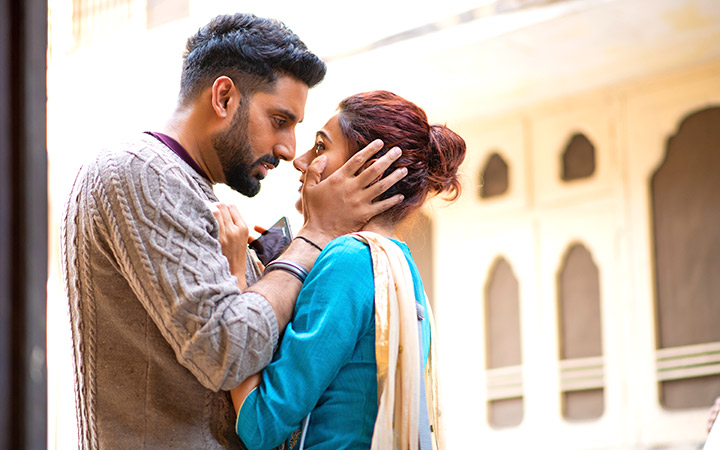 Bollywood is mainly known for love stories and many films related to this genre were made here and they also earned success. And one of those love stories is the theme of love triangle. Filmmaker Anurag Kashyap, who is known for dark and heart heating cinema, this time decided to make a light-hearted romantic film which is basically based on a love triangle. So will this ‘commercial experiment’ of Anurag Kashyap work, or will his attempt fail, let’s review.

Manmarziyaan is the story of a girl trapped between two lovers. Rumi (Taapsee Pannu) is a flamboyant girl living in Amritsar. She is orphaned at a very young age and then lives with her uncle in their family. Rumi falls in love with Vicky aka DJ Sandez (Vicky Kaushal), who lives very close to her house. Vicky secretly jumps off the roof and often comes to meet Rumi. One day he is caught red handed and there is a ruckus in the whole house and locality. Rumi’s family members decide to marry her. But Rumi only wants to marry Vicky. At the same time, she assures her family that Vicky and her family will come to her house to ask for her hand. But there Vicky runs away from responsibilities. And so Vicky and Rumi get into a serious fight over the issue of marriage. Meanwhile, Robbie (Abhishek Bachchan), who is based in London, comes to Amritsar to meet his family and get married as per the family’s wishes. Knowing that Vicky is running away for marriage, Rumi agrees to marry anyone. And meanwhile Rumi and Robby meet each other. Robby falls in love with Rumi at first sight and agrees to marry Rumi. As soon as Vicky learns about Rumi’s marriage, he gets furious. Just a day before the wedding, Vicky tells Rumi that now he has changed and is ready to take up the responsibility. However, Rumi is still in love with Vicky so she agrees to run away with him. But before that she meets Robby at night and tells him that she cannot marry him. What happens after this, it is known only after watching the next film.

Kanika Dhillon’s story is impressive but a bit noble. Kanika Dhillon’s screenplay is captivating and layered at many places. Well-knit characters brought life to the film. However, after a while, the film starts slipping in the second half. Apart from this, the film is of 155 minutes which is a bit long. Also, the bold theme of the film may turn off certain audiences. This film can appeal to the urban and youth audience. Kanika Dhillon’s dialogues are powerful and flamboyant. The one-liners of the film are well written.

Anurag Kashyap’s direction is his trademark stamp, but the theme of this film is a bit lighter than his other films. He does justice to the plot of the film overall but his execution fails to do much when the film is repeated continuously.

Let’s talk straight. After watching the trailer of Manmarziyaan, some people claimed that this beats [2000] Aur Hum Dil De Chuke Sanam [1999] It’s a remake, but it’s not. From the weaving of the film to the decoration of the characters, Manmarziyaan from everywhere does not match anywhere between these two films. The film begins on a funny note, musical note which depicts the hot romance between Vicky and Rumi. As the title suggests, the characters in the film follow their heart. This aspect of the film is handled correctly, especially in the first half. The drama scenes and songs are blended well and it is worth watching. One of the best scenes of the film comes in the first half when Rumi gets angry at Vicky on his way in the middle of the highway. The film’s interval happens at a crucial juncture and the audience is excited to see more new ones ahead. But alas, from the second half the film starts slipping and dragging. The scene just before the climax seems incomprehensible though the way the climax is presented makes up for it.

Manmarziyaan is adorned with some great performances. Taapsee Pannu gives a great performance and one cannot take their eyes off her. Taapsee recently started Pink [2016], , name shabana [2017] and country [2018]Memorable performance. But his performance in Manmarziyaan is the most spectacular and definitely his best work till date. Vicky Kaushal, who is in a lot of form these days, once again delivers a rocking performance. He is completely absorbed in his character and from every angle looks like a DJ from a wannabi musician in a small north Indian town. His crying, his silence and the way he talks with his eyes are really good. Abhishek Bachchan creates a very strong position and it is nice to see him on screen after many years. He plays the character of a humble man while the other two characters are sharp and sharp. But that doesn’t mean that Abhishek hides somewhere between the two. He makes his presence felt in the second half on his own and it is worth watching. The supporting characters also do a great job in the film. Ashnoor Kaur (Kiran; Rumi’s cousin) suits her. Saurabh is an important part of Sachdev (kaka ji, who runs the marriage bureau) and she plays it well. Vikram Kochhar (Robby’s brother) adds humor to the film. The actors who play Rumi’s tailor and Robby’s mother also play a very good role.

Amit Trivedi’s music is like a pillar to the film as it is a musical film. Not only are all the songs in the film worth remembering but they also seem to fit into the story of the film. ‘Darya’ is the best of all the songs and both the versions of this song are played at the turning point of the film. ‘Grey Wala Shade’ plays at the beginning and sets the mood of the film. ‘F for Fyaar’ is fine while ‘Dhyaan Chand’ is funky and shot well. ‘Bijli Gigigi’ is peppy while, ‘ ‘Kundali’ is a fun song. ‘Halla’ is played at very tense moments. ‘Chonch Yuddiyan’ and ‘Jaisi Teri Marzi’ are good while ‘Sachchi Mohabbat’ is heartwarming. Amit Trivedi’s background score syncs well with the theme of the film. And the twin sensations in the film are worth watching – Poonam Shah and Priyanka Shah dancing in the streets of Amritsar giving a unique touch to the film.

The cinematography by Sylvester Fonseca has captured the tension, the real location and the local places of Kashmir very beautifully. Meghna Gandhi’s production design is quite evident in the visuals from Vicki’s studio. Prashant Sawant’s costumes are quite appropriate. All the characters are dressed according to their personality. Arti Bajaj’s editing is simple and clean.

Overall, Manmarziyaan comes across as a contemporary and an unconventional story with some stellar performances and strong writing. The bold theme of the film may limit its appeal but its target audience will surely love the film.