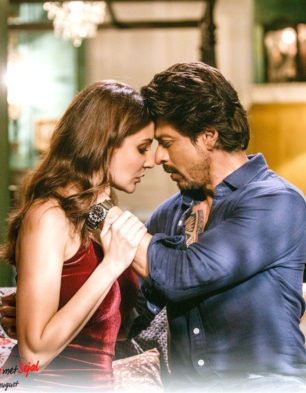 At times, tour guides are an important part of people’s travel experience. If we visit any attractive monument or any tourist place and if a guide does not give us the required correct information, which will enhance our experience further, then our journey seems incomplete. But have we ever felt whether the guide is happy in his job or not? Yes, they do, most of us would argue. After all, the opportunity to visit the best places in the city every day is a dream job. But visiting the same place over and over again is not new to a guide? What if a guide loses himself and needs a guidance? Jab Harry Met Sejal attempts to depict the story and condition of one such guide. So whether, viewers will be able to engage with the guide or does the whole experience get boring, let’s review.

Jab Harry Met Sejal is the story of a bored tourist guide whose life changes when an irritable tourist comes into his life. Harry (Shah Rukh Khan) takes tourists on a trip to several European countries. He is a bit aloof and strict, and it is difficult for him to maintain long-term relationships. Sejal (Anushka Sharma) is a tourist who takes Harry’s services along with his entire family. During this trip, Sejal gets engaged to Rupen (poet Shastri). Unfortunately, her engagement ring is lost and she decides not to return to Mumbai until she finds it. She forces Harry to help her find her lost ring, and Harry agrees to do so unintentionally. How Harry and Sejal find each other and and themselves during ‘Mission’ is only revealed after watching the rest of the film.

Jab Harry Met Sejal starts off at a rapid pace. No time is wasted showing Harry’s life in detail. His enthusiasm as a guide, his moments of loneliness when no one is watching and his troubled relationships with women are all summed up in just a few minutes in the single ‘Safar’. Sejal also gets introduced in no time and the real fun begins as she tries to find her lost ring. The humor comes out very well and the first half moves at an upbeat pace. The scene where Sejal gets into trouble at a bar in Prague and then comes the most exciting part of the first half. The song ‘Hawayein’ is featured on a touching and cheesy moment of the film before the interval. After the interval, the film starts dragging. The makers seem confused as the story falls apart. The twist in the story related to Angunthi may seem childish to a section of the audience. At some point, it seems that where is the film going. The ending of the film is also a twist but it is better than the first. The film ends in a predictable manner.

Imtiaz Ali’s story is vulnerable and gives a retrospective of some of Shah Rukh Khan’s major love stories. Imtiaz Ali’s screenplay is poor and inconsistent. Some scenes have been handled cleverly and emotions have been brought in. One has to watch the scene when Harry innocently asks Sejal to hug him. But the story behind it is not shown, such as why did Harry have to leave his village and how was he related to his family? Why did he never return to his ‘Pind’? It seems strange to see Harry being overwhelmed and screaming at the church. And in the same way he shouts the girl’s name out loud in the echo sequence. Even Sejal’s actions do not seem justified. The way she pretends to be Harry’s girlfriend and vie for his attention and admiration, doesn’t look that impressive. It also wonders how Sejal’s family leaves her alone in Europe and they don’t care about her. No one decides to cancel their trip back to Mumbai for Sejal’s sake and leaves her alone. Also, when it’s revealed that Harry is a characterless guy who was caught getting physical with his clients, too. In fact, he had to leave the country after another such case. But even so, Harry’s boss doesn’t mind when a high-profile client like Sejal is left at his mercy. Though Imtiaz Ali’s dialogues are straight out of life and yet well worded.

Imtiaz Ali’s direction, just like the script, is weak. After making great films like Jab We Met, Love Aaj Kal, Rockstar and Highway, the writer-filmmaker doesn’t seem to be in full form.

The acting of the actors is amazing. Shahrukh Khan looks awesome and does a great job. He brings the worry very beautifully without going over. Also, his trademark style of Kabhi Alvida Na Kehna and Kal Ho Na Ho is seen in some scenes in the film which are quite good. However, some of his Punjabi dialogues are difficult to understand. Anushka Sharma reaches another level, higher in this film. She gets into her character and her smile and laughter makes her performance even more appealing. Chandan Roy Sanyal (Gas) has a minor role. Aru K Verma (Mayank) has an important part and is quite good. Evelyn Sharma (Mayank’s fiancee) doesn’t get much to do.

Pritam Chakraborty’s music is a mix of some good and average songs. ‘Radha’ is the best song among its songs, especially the way it has been shot and played. ‘Hawayein’ is its second good song and it has been shown in a very beautiful moment in the film. ‘Safar’ serves as a good introductory track. ‘Beech Beech Mein’ and ‘Rola’ do not make the desired effect. ‘Furr’ is played in the background and could have been done away with. ‘Butterfly’ is a foot-tapping song, which is played in the end credits. Hitesh Sonik’s background score fits perfectly with the mood of the film.

KU Mohanan’s cinematography is stunning. The sights of Europe and its corridors are captured very well. Arti Bajaj’s editing could have been more crisp and simple. The way the song ‘Beech Beech Mein’ starts immediately after the interval, it leaves the audience confused.

Overall, Jab Harry Met Sejal is special in itself. But there are some flaws in the film, which makes the film weak, and because of the poor script. The film may do well in the first week at the box office but it will struggle in the second week.