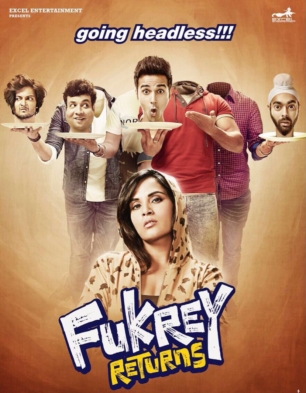 Fukrey, which released in the year 2013, came off without much fanfare and emerged as a hit due to its quirky writing, lovely Delhi look and catchy execution. And after that Fukrey Returns was announced and interestingly, the same star cast was retained in it. So, will Fukrey Returns just be better than its previous film or will it be even better? Or the film will fade in comparison and fail in its endeavor, let’s review.

Fukrey Returns tells the story of the Fukreys and the madness that begins after their enemy comes out of jail. A year after Bholi Punjaban (Richa Chadha) is arrested, the entire gang of boys—Honey (Pulkit Samrat), Chucha (Varun Sharma), Zafar (Ali Fazal) and Lali (Manojat Singh) enjoy their time together. But their happiness and joy are eclipsed when Bholi Punjaban is released from jail. She seeks to avenge his humiliation and as a thanksgiving to the Fukrs forces them to be a part of all illegal initiatives, which include duping the entire city of Delhi. How big problems arise and how the boys get trapped in this plan and get out, all this is known after watching the rest of the film.

Fukrey Returns starts off on a good note as the opening credits are well crafted and set the mood for the film. The dreaming scenes are very funny and funny. The film moves fast as the audience doesn’t need an introduction as the audience is already familiar with them. Let’s expect a firework (deliberate joke) after Bholi attacks the boys with firecrackers. But the plan to cheat Delhiites is not executed properly, moreover, it moves very fast. This plan is also very foolish and one can guess that it is bound to fail. As a result, there is no realistic factor, despite the fact that logic is not taken seriously in the series. Also, all the characters in Fukrey had to play some part in the film. Many characters don’t have much to do in Fukrey Returns. Varun Sharma steals the limelight and Ali Fazal has to do very little. Better not to talk about Priya Singh and Vishakha Singh. Thankfully, there are a lot of positives in the film. The one liners of the film are funny. Many scenes in many places have been shot very well. The film picks up pace in the second half and the climax is quite complicated.

Vipul Vig’s story is very nuanced and features the same formula used in Fukrey. Vipul Vig’s screenplay though is very good and the uniqueness is well added to the script. This could have been simplified a bit in the lottery scam scene shown in the first half. Vipul Vig’s dialogues are one of the high-points and he is sure to get a lot of applause and whistles. Mrigdeep Singh Lamba’s direction is the same as the first part and is in the works for the film. Arguments were put on the backseat in Fukrey but the director handled it well by making sure that it doesn’t seem impossible even for his genre. But some scenes of Fukrey Returns turn out to be very inconsistent. For example, the way the boys go to the Delhi zoo for a hang-out, playing with Tiger’s baby despite being closed there is silly but thankfully later, this aspect has a connection in the film. Because it is a clean film and can be watched with the whole family. And this is what definitely gives Fukrey Returns a huge appeal.

Talking about acting, Varun Sharma is decent. He has a big and important role and he does wonders. Some scenes do not match the story of the film but still no one will complain and Varun gets a lot of praise. For example, in a scene where Varun meets his date at a zoo and then the scene where he talks about how his father got him. Pulkit Samrat suits and plays his character with flair. Despite Varun, he manages to maintain a strong position. Ali Fazal is sidelined though he delivers a fine performance. Manojat Singh looks good and laughs at many places. Richa Chadha once again delivers a powerhouse performance. She enjoys her character, Gundi Boli Punjaban and what she sees. And the climax has a surprise for the viewers concerned with Bholi, which will surely be loved. Pankaj Tripathi (Pandit) has a pivotal role and he contributes to the laughter. Ever since the release of Fukrey, Pankaj has become quite popular and in this regard, he does not disappoint and has a huge on-screen presence. Rajeev Gupta (Babulal Bhatia) suits the role of the villain very well. Priya Anand (Priya) is lovely and sadly she doesn’t get much scope. Vishakha Singh (Neetu) is OK in the cameo. The actor playing the Chief Minister and the actor playing the character of Priya are fine.

The songs do not reveal much of the purpose of the film. ‘Mehbooba’ is a foot-tapping song whereas, ‘Tu Mera Bhai Nahi Hai’ plays in the background. ‘Ishq de Fanier’ is missing from the film and ‘Pe Gaya Khalra’ is played in the end credits. Sameeruddin’s background score is impressive.

Overall, Fukrey Returns is a fun, clean film that works despite the irrational and slightly unbelievable plot. Since there is no other significant Hindi film around it, Fukrey Returns definitely has a good chance of doing wonders at the box office.