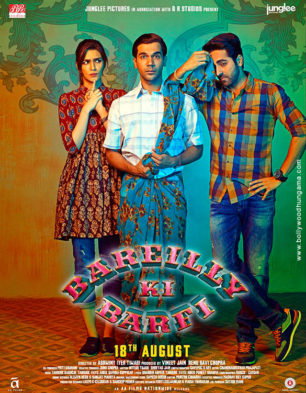 For more than a decade, our filmmakers prefer to set their films in smaller towns, especially in North India. Such rooted stories work for a long time, especially if they provide enough entertainment. Strong examples of this are the recent releases, Tanu Weds Manu Returns, Sultan and Dangal. The film ‘Bareilly Ki Barfi’ which released this week is based on the city of Bareilly in UP which, as the title suggests, looks quite entertaining in the released promos. So will it be able to tickle the audience or will it become another flop in flop movies, let’s review.

The story of Bareilly Ki Barfi is about a printing press owner who devises a unique plan to woo a girl he loves, but his idea backfires. Chirag Dubey (Ayushmann Khurrana) runs a printing press in the city of Bareilly, Uttar Pradesh. After a heartbreak, he writes a book titled ‘Bareilly Ki Barfi’ on the girl he falls in love with. He fears that if he writes a book in her name, the girl will condemn him. So he introduces his shy, serious, soft-spoken friend Pritam Vidrohi (Rajkumar Rao), as the author of the book. The book doesn’t work, but five years later, Bitti (Kriti Sanon), the coolest girl in town, buys this book from the railway station. On the train, Bitti reads the book Bareilly Ki Barfi and is shocked to learn that the girl mentioned in the book is exactly the same as she is, very lively, break dance lover, smoker, film buff and progressive. . She immediately returns to Bareilly and meets Chirag, as he got that book printed, and asks him about Pritam’s contact details, as he impressed her a lot with that book. Chirag is unable to tell that the author of ‘Bareilly Ki Barfi’ is himself and not Pritam. Chirag then devises a plan – he asks Pritam to do a makeover, meet Bitti and then break her heart and run away. At this juncture, Chirag will successfully woo Bitti but sadly this does not happen and Bitti slowly falls in love with Pritam. How Chirag handles this situation, it will all be known only after watching the film.

Bareilly Ki Barfi starts off well and the characters are introduced quite well. But the film really progresses in the true sense when Pritam’s entry in the story of the film. His transformation and in many ways, the whole process is quite fun, and that is the best part of the film. The Chirag-Bitti scene in the first half is not that good but can be seen. There is a very good scene when Bitti is celebrating Chirag’s birthday. After the interval, initially things look good. The comedy and theatrical scenes go on continuously and entertain but at some point the film drags on. Bareilly ki barfi is not so inconsistent, but still, some aspects find it difficult to digest. For example, why did Chirag not use a surname to write his novel? His character is portrayed as domineering, who leaves no stone unturned to terrorize and harass Pritam. Still, he cannot muster the courage to tell Bitti how much he loves her. There is a twist at the end of the film which the audience is unaware of and it brings a relief as the climax was going to be clichéd. But the explanation behind the twist, once again makes the film confusing.

Ayushmann Khurrana always appears confident and plays some of the scenes quite well. He fits well as the lover boy and the bully (with scenes from Prince) and that’s commendable. Although his friendly avatar is somewhere reminiscent of his work in his film Meri Pyaari Bindu. Interestingly, he has played similar roles in his back-to-back films. Kriti Sanon delivers excellent performance and suits the character of a small town girl very well. She doesn’t succeed completely but still, it works for her progressive character. Prince is very good. At first he comes across as a shy, serious man and after a major transformation he is seen in an outgoing, flamboyant avatar, and he plays both avatars well. If Bareilly Ki Barfi will be remembered in the years to come, it will be primarily for the performance of this National Award winning actor Pankaj Tripathi (Narotram Mishra), who is funny and suits the emotional scenes! Though he has played such roles before but he always keeps that in mind and plays his part. Seema Bhargava leaves an indelible mark. Her constant boasting during Bitti’s wedding and the way she always shines makes her a potential bridesmaid. Rohit Chaudhary (Munna) suits Chirag’s sidekick. The same is true for Swati Samawal (Maya).

The music of the film is not worth remembering. ‘Sweetie Tera Drama’ is the only song which is good. ‘Badas Babu’ is played during the amusing montage of Pritam’s transformation. The song ‘Nazm Nazm’ leaves no mark, while the song ‘Bairagi’ goes in vain. ‘Twist Kamariya’ seems to be forced, but since it comes during the opening credits, it doesn’t get much attention. Sameeruddin’s background score is extremely entertaining and uplifting.

Gavek U Arya’s cinematography is nothing special but the first scene is captured quite well. Chandrashekhar Prajapati’s editing is digestible but gets lost in the second half.

On the whole, Bareilly Ki Barfi is a special film in itself with excellent performances but does not attract. Due to lack of big cast in the film, lack of promotions, lack of great music, and above all the dominance of Toilet-Ek Prem Katha, the film will suffer a lot at the box office.