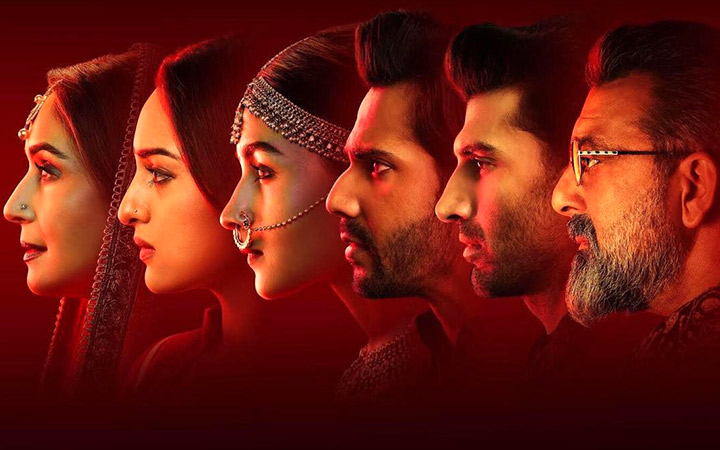 There was a time when multi starrer film was in trend in Bollywood but then a time came when such films did not get good response. Few franchises like Golmaal, Housefull have been exceptions till now. Even the Dhamaal franchise manages to beat it and its recently released film Total Dhamaal created new flags of success at the box office. One such multistarrer film released in theaters this week, Kalank. Many big and veteran stars will be seen in the lead role in this film. So does Kalank manage to make its way into the hit multistarrer films, or does it fail in its endeavor, let’s review.

Kalank is the story of such lovers who are not in their destiny to be together. This year is 1945. Dev Chowdhary (Aditya Roy Kapur)’s wife Satya Chowdhary (Sonakshi Sinha) has cancer and is told that she has only one year to live, or a maximum of two years. Satya, knowing that Dev will be shattered after his death, decides to find another wife for him. His search takes him to Rajputana, Rajasthan where Roop (Alia Bhatt) lives. Roop and Satya’s family have a long standing bond. Roop at first rejects Satya’s offer but after knowing her illness, she agrees. However, she has one condition – Dev will have to marry her first and only then will she go to live in Chowdhary’s house. Satya, Dev and Dev’s father Balraj (Sanjay Dutt) agree to Roop’s condition. Dev and Roop get married and from the very beginning it is made clear that this marriage is just a pact. After marriage, Roop moves to Husnabad near Lahore where Chaudhary lives. She initially feels lonely but then becomes curious to hear the voice of Bahaar Begum (Madhuri Dixit). She decides to learn music to overcome her loneliness. Satya and the others in the house refuse to hear Roop’s decision at first because Bahar Begum is a tyrant who runs a brothel and that brothel is in the infamous area of ​​the city called Heera Mandi. Roop insists, after which Chaudhary gives permission from the family. Meanwhile, Bahar gets impressed by Roop and decides to teach her singing. At Heera Mandi, Roop bumps into the flirtatious Zafar (Varun Dhawan). Both get attracted towards each other. Zafar is a blacksmith and works for Abdul (Kunal Khemu), who has a communal mindset. He is also against Dev’s newspaper Daily Times which promotes the idea of ​​one nation theory, rejects the notion of partition. At the same time, the steel industry boycotts coming to Heera Mandi as it will affect their blacksmith business. Bahar senses that Zafar is being attracted to Roop, she warns him. Eventually, she learns what Zafar’s motive is behind romancing Roop and the dire consequences Zafar could face for doing so. What happens after this, it will be known only after watching the next film.

Shibani Bathija’s story is cheesy and silly and rests on a nuanced plot. Except for Roop-Zafar’s track, the story of all the other characters in the story was not depicted due to which there are many shortcomings. Abhishek Varman’s screenplay makes no effort to make up for this shortcoming. Instead of quickly ending the scenes, he lets them go further. And so he fails to make up for these shortcomings. Hussain Dalal’s dialogues are quite good in many places. But in some scenes, it’s too filmy and can even unintentionally bring out laughs.

Abhishek Varman’s direction is not up to the mark. He made his directorial debut, 2 States [2014] I was quite in control. But in the case of stigma, he is defeated. Anyway, he couldn’t do much when the script itself was flawed. But it needs to be said that the climax of the film is very catchy and he is able to handle the visual grandeur of the film well during this time.

Kalank, the famous and popular trademark card of Dharma Productions, starts off with a surprise but doesn’t deliver in its usual style. The three production houses associated with the film are quickly mentioned and the filming begins. Apart from this, its main starcast has been smartly depicted in the film without showing their face. This can make everyone believe that a film can be watched with a great script and execution. In no time, it becomes clear that this is not going to happen. The biggest problem with the film is that most of the developments in it are incomprehensible. Right from the start, the audience will wonder why Satya had gone to Rajputana in search of a bride. Roop had reminded Satya that his former family members had helped his family a lot but no information was given about it so it seems incomprehensible. It is quite funny that Zafar never even saw the face of Dev Choudhary even though Dev is the main figure of the area and Zafar also has a mutual enmity with Dev. The whole track of the blacksmiths rebelling against industrialization and for a separate nation also seems gimmicky. Why was Abdul Dev so insecure about the news being published in the newspaper? Let us assume that Dev’s newspaper Daily has a large readership. But it can’t be the only newspaper in circulation? He could have taken the help of other newspapers to spread his agenda. The film looks long and some scenes could have been skipped. The bullfight scene, for example, didn’t make any sense, it was just added to garner an audience. On the other hand, the positive side of the film is that some of its scenes are very well directed. As-the-intermission point, though predictable, is observable. The scene of Bahar Begum, Balraj and Zafar, which comes in the second half, is quite dramatic. Apart from this, the climax scene and the stampede at the railway station keep the audience engaged.

Varun Dhawan and Alia Bhatt save the film to a great extent from being a huge flop. Varun Dhawan as always gives excellent performance and gives his 100 percent to his character. He also brings humor at times. He shines in the climax. Alia Bhatt does her best like Varun but she falls out because of weak writing. She has arguably the most screen time among all the six actors and that she takes full advantage of. Aditya Roy Kapur looks dull but so is his character. Her dialogue delivery is quite good and she appears quite well in a scene with Varun. Sonakshi Sinha is good but her role in her own film Lootera [2013] Reminds me of the second half. Madhuri Dixit looks gorgeous and gives a great performance. Sanjay Dutt, in the special appearance, looks fine. Kunal Khemu (Abdul) plays the role of the villain quite gracefully. Achint Kaur (Saroj), Hiten Tejwani (Ahmed) and Pavail Gulati (Aditya; the journalist who interviewed Roop) are fine. Kiara Advani goes absolutely useless. Kriti Sanon looks very glamorous in item song.

Pritam’s music could have been better. ‘Ghar More Pardesiya’ and then ‘Destroyed Ho Gaya’ leave an impact. The title track is played in the background. ‘First Class’ is attractive and ‘Rajwadi Odhni’ is fine, but they come one after the other. ‘Aisa Gera’ has been forcefully added. Sanchit Balhara and Ankit Balhara’s background score is dramatic and adds to the impact.

Binod Pradhan’s cinematography is captivating and has big screen appeal. Amrita Mahal Nakai’s production design is unrealistic and although it may remind of a Sanjay Leela Bhansali film, it is praiseworthy. The Hira Mandi set and especially the Bahar ka Tabayfkhana are amazingly beautiful. Manish Malhotra and Maxima Basu Golani’s costumes are appealing, but not authentic in terms of certain eras and economic status of some characters. Sham Kaushal’s action is fine and not too violent. The choreography of Remo D’Souza, Bosco-Caesar and Saroj Khan is commendable. The VFX from Fluidmask Studio and NY VFXWaala is good overall, but quite bad in some places, especially in the bullfight sequences. Shweta Venkat Mathew’s editing is very disappointing as the film looks too long at 168 minutes.

Overall, Kalank is a film that is beautiful to look at but lacks soul and this is largely because of its weak writing, excessive length and music. The film will be subject to verbal criticism at the box office, due to which it will be difficult to garner an audience. After the initial enthusiasm, its box office collection will also go down. This film disappoints.