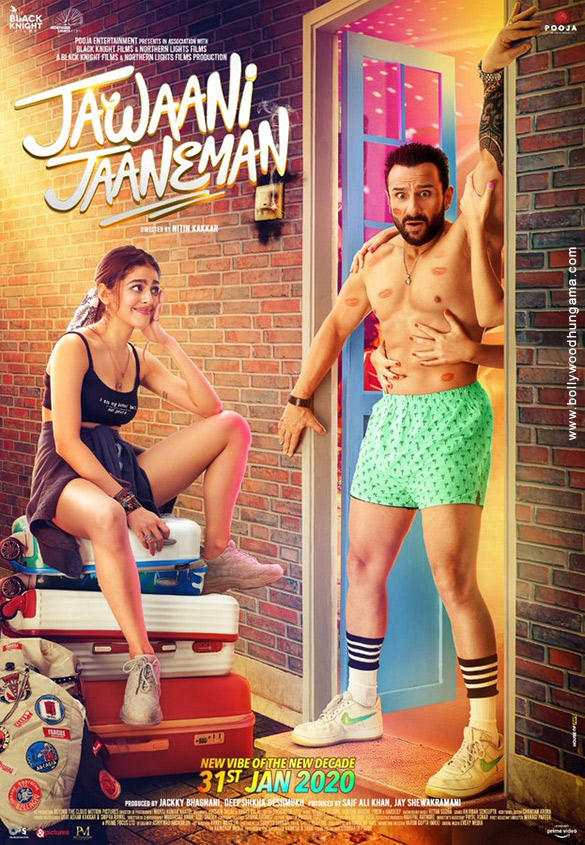 Saif Ali Khan suits all kinds of characters but cool-bindass and casino type characters suit him to many cinepremis. In his career, he has done many films with such characters. And now after a long time, Saif Ali Khan is once again back with his most loved character in the film Jawaani Jaaneman which released this week. The special thing is that Saif is launching his new banner Black Knight Films with Jawaani Jaaneman. So does this film live up to the expectations of the audience or does it disappoint the audience? Let’s review.

Jawaani Jaaneman is the story of a 40-year-old playboy man whose life takes a sudden turn. Jassi aka Jazz (Saif Ali Khan) is in his 40s and lives in London. She is single and in no mood to commit. Professionally he is a real estate broker and works with his brother Dimpu (Kumud Mishra). But most of his time goes to spending time with girls and partying. He is also going to do a property deal that will make him the biggest property dealer in London. His life is going well according to him but one day when he meets Tia (Alaya Furniturewala), a lot changes. For the first time he flirts with her and his goal is to take her to his bed. But she tells him that she is his daughter. And the DNA test reveals that she is his daughter. Not only this, now Tia is also going to become an unmarried mother. Then Jazz is shaken that he is about to become not only a father but also a maternal grandfather. What happens next after this, it will be known after watching the next film.

Jawaani Jaaneman is a remake of an Italian film. The plot is good but it could have been made more fun and entertaining. Screenplay is inconsistent and weak at many places. Only a few scenes bring laughter. The dialogues of Hussain Dalal and Abbas Dalal are witty and try their best to enhance the impact.

Nitin Kakkar’s direction is average. He doesn’t keep the flow of the film organic. Some developments happen suddenly, such as Jazz’s feeling for Riya (Kubbra Sait), Jazz asking Tia to stay at her house. These scenes are not digested. But in the second half, an unknown person accusing Jazz of cheating him in a property deal suddenly comes to the fore. Till now the audience was thinking of Jazz as lazy, but then it comes to the fore that it works too, it is not digested. And this revelation sounds strange. In contrast, some scenes in the film have emotion and humour. Apart from this, the length of the film is 119 minutes.

Jawaani Jaaneman starts off well as the audience gets acquainted with jazz and its playboy lifestyle. Interest in the film grows when Tia enters and she reveals the truth. This is fun to watch. Another funny scene in the first half is when Jazz and Tiya meet Dr. Kripalani (Kiku Sharda). The audience feels that a lot will happen here but the story does not progress from here. The intermission mode is also a bit awkward. After the interval, the story progresses a bit but once again it starts falling apart. Simultaneously, the property deal track also reduces the impact. The track of Ananya (Tabu) brings interest to the film but again the film loses its impact. The final scene of the film is heart-wrenching.

Saif Ali Khan is seen in full form and entertains throughout the film. Such roles suit him and he constantly tries to rise above the script. Alaya Furniturewala makes a great debut and looks quite confident. She looks quite gorgeous and she is one and only actress who touches the hearts of the audience to an extent. He definitely has a good Bollywood career ahead. Tabu’s entry is late but she brings laughter to the film. But there is no emotional touch in his character. Chunky Pandey (Rocky) doesn’t have much to do in the beginning. But he has an important scene in the second half but it doesn’t work. The Kubbra sets look lovely and after seeing them, one wants to see more of them. Kumud Mishra is dependable. Kiku Sharda looks funny. As per the requirement of the character, Dante Alexander (Rohan) appears over the top. Ramit Sandhu (Tanvi) leaves a mark. Farida Jalal (Jazz’s mother), Shivendra Singh Mahal (Jazz’s father) and Diljon Singh (Grover) are fine.

All songs are forgettable. ‘Ole Ole 2.0’ is a bit memorable as it is the new version of the popular song. Whereas, ‘Gallan Kardi’, ‘Bandhu Tu Mera’ and ‘Mere Babula’ do not work. ‘Jine Mera Dil Lutya’ plays in the end credits. Ketan Sodha’s background score is sans good.

Manoj Kumar Khatoi’s cinematography is pleasing. The locations of London are well captured. Urvi Ashar Kakkar and Shipra Rawal have better production designs. The costumes of Sanam Ratansi are quite glamorous and all the actors in the film look great. Editing by Sachindra Vats (additional editing by Chandan Arora) stands out in many places.

Overall, Jawaani Jaaneman is a film built on the stellar performances of Saif Ali Khan and Alaya Furniturewala. But the film could not work due to weak direction and weak emotionally. At the box office, it will struggle to garner audiences due to lack of buzz.