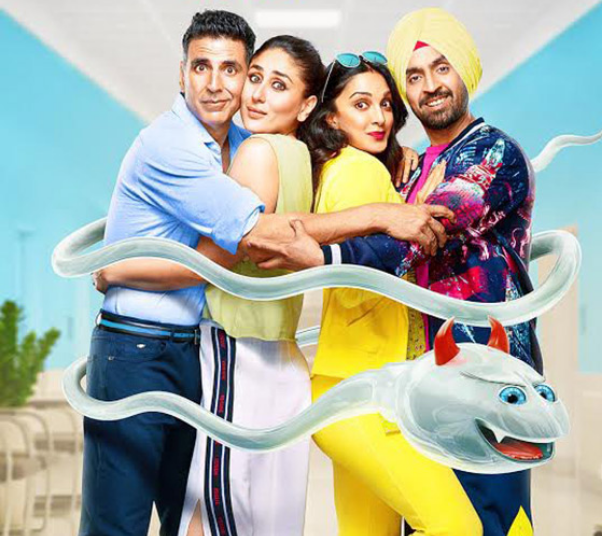 Till 2012, the word sperm was seen as a taboo in Hindi films. But then came the film Vicky Donor, which made the term very common and accepted throughout Hindi cinema. And now after a full seven years, there is a film woven around the word, Good Newwz, which hit the theaters this week, with a slightly different story.

Good Newwz has created quite a buzz because of its unique theme rather than its catchy starcast. The trailer added to the excitement of the people. But now the question arises whether the film was told in the trailer itself or is there more aspect to its enthusiasm? Let’s know

Story of the film- [बिना खुलासा किए]…the epic story of the Good News goof-up. Varun Batra [अक्षय कुमार] Works at an automobile showroom in Mumbai. Deepti alias Deepu [करीना कपूर खान], who is a journalist by profession, is his wife. Both have been married for seven years. And so now he wants to increase his family, but both are not able to do so.

Varun’s sister [अंजना सुखानी] At the insistence of the two, a reputed doctor, Dr. Joshi [आदिल हुसैन] decide to visit a fertility clinic run by Dr Joshi suggests that they can have a child through IVF. Varun and Deepu agree to this.

A couple from Chandigarh Honey Batra [दिलजीत दोसांझ] and monica [कियारा आडवाणी], also come to meet Dr. Joshi. And then the surname of both the pairs becomes the reason for the biggest goof-up.

Good Newwz has an intriguing storyline, but most importantly, the film is bound by a smart and engaging screenplay. The writer has blended the drama, emotions, romance and humor well with the story and that’s what makes this film a great film from beginning to end.

The film gets to its point from the very beginning and the goof-up is nicely intertwined with the script. There are hardly any flaws in the film. Surely the film could have been done without a song or two, but these are very minor drawbacks in front of a strong and articulate script. While the drama keeps you hooked from the beginning, the dialogues add to the impact of many scenes.

Raj Mehta [गुड न्यूज के साथ अपने निर्देशन करियर की शुरूआत करते है] Handles the whole film well. It is very difficult to handle such a subject if you are coming into directing for the first time, but it deserves praise for doing justice to the writing content.

The director handles the second half intelligently. Some scenes are handled in the most mature manner, especially Kareena and Kiara’s Pani Puri sequence or Akshay Kumar’s break in the hospital.

Good Newwz is a wonderful and remarkable film with excellent performances. Akshay Kumar gives his superb performance. His emotional part is remarkable. It brings joy to see Kareena Kapoor Khan on screen after a long gap. She looks fabulous in her role. And it looks quite stunning. Diljit Dosanjh’s entry is a bit late in the film but as soon as he hits the screen, the film reaches a different level. He gives top level performance. Kiara Advani doesn’t have much to do in the first half but after the interval she gets involved in many scenes.

The songs match well with the film. Two songs are the best – ‘Sauda Khara Khara’ and ‘Chandigarh’. The cinematography captures the mood as well as the emotions well.

Overall, Good Newwz is without a doubt a definite hit film. Smart writing, tremendous humor and heart-warming emotions are the three most important aspects of this well-made film, which make it a great film. And the fourth most important aspect is the stellar performance of its star cast. At the box office, the film will emerge as a big winner of the year 2019, which will bring happiness in this festive season. Good News, which proves to be a profitable deal for the makers, makes its name truly meaningful for the makers.