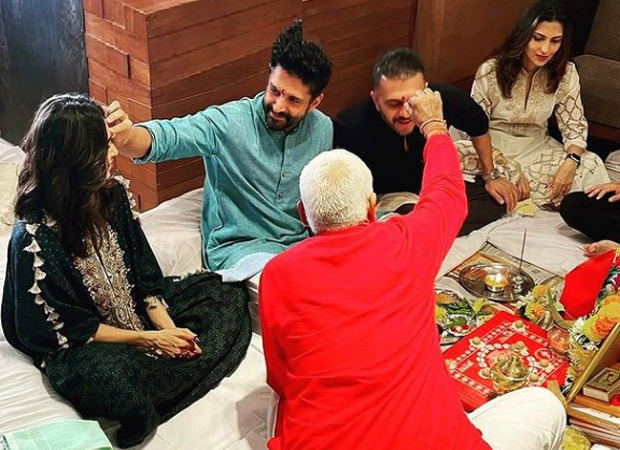 Farhan Akhtar, trolled for performing Diwali Puja, will take legal action against those who spread hatred about religion

As always, this time too Bollywood stars celebrated Diwali with pomp. Farhan Akhtar also celebrated the festival of Diwali and shared its photo on social media. In these pictures, Farhan Akhtar is seen worshiping Diwali with his girlfriend and actress Shibani Dandekar. Sharing this photo, Farhan Akhtar congratulated the fans on Diwali and wrote, ‘Happy Diwali.’ , But some people did not like Farhan Akhtar’s worship on Diwali like this and he was trolled fiercely on social media. But this time Farhan and his family did not take these trolls lightly and decided to take legal action against them.

Farhan and his family, who do not give much attention to social media trolls, have become very angry with these trolls this time. A source close to the Akhtar family said, “We all believe in the unity of the gods. Farhan’s father is Muslim and his mother is Parsi and he celebrates Diwali every year as long as he remembers. Celebrating Diwali for Farhan is naturally like celebrating Eid. Then why was he trolled?”

This time the level of hatred has taken a different form.

The source further added that Farhan’s family is so angry with these trolls this time that she is going to take legal action against them. The source said, “Javed saab (Farhan’s father Javed Akhtar) feels that if some action is not taken against the hate remarks, he will not understand that he hurts anyone’s sentiments by doing so. Apart from this, he also feels that haters and abusers want his attention, so he does this. Generally, Farhan’s family has been ignoring the abuse or trolls on social media. But this time the level of hatred has taken a different form and it is being linked to religion, which is not right.”

It’s time to shame the haters and send them to jail.

However, no statement has come out from Farhan’s side on this entire matter. He has been advised that his legal team will deal with the situation.

responsibility of being a celebrity

Some time ago while speaking on the responsibilities of being a celebrity, Farhan told me, “It is very important to try to be the best person you can be. It doesn’t mean that you try to do things that you are not. Mistakes Most of all. I’m pretty sure I’ve made my share of mistakes. But the important thing is to try and do the right thing. It’s very important to remember that the public’s eyes are on us all the time. So as much as possible Try to behave well. One may not always be successful. But there is much more to be said in favor of a genuine effort to do the right thing.”