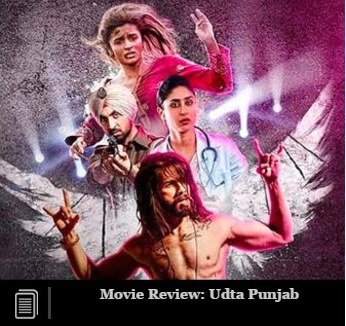 Bollywood has been witness to a variety of genre films that have carved a niche for themselves on the silver screen. After the headless comedy of the comedy film Housefull 3 and the suspenseful film 3 by Amitabh Bachchan, Udta Punjab hit the theaters this week. The film depicts the problem of rampant drug abuse in Punjab. Will Udta Punjab prove to be a return for the makers at the box office or will it face disappointment, let’s analyze it.

Udta Punjab begins with the scene when a Pakistani man throws a drug packet at the Indian camp on the Indo-Pak border. The scene marks the entry of rockstar Tommy ‘Gabru’ Singh (Shahid Kapoor) and his ‘addictive’ lifestyle. One day Tommy Singh is fired by the producers of his song due to a delay in the recording of his song. This was not enough, Tommy Singh is arrested by the Punjab Police on the grounds of drug abuse in the midst of his birthday party. When he is released from prison, he is somehow ready to give his performance in front of the eagerly waiting audience, despite the panic. Before the performance, he does something so strange that the audience becomes thirsty for his blood. On the other hand Pinky Kumari who is also known as Mary Jane (Alia Bhatt) migrates from Uttar Pradesh to Punjab. Her background shows that she was a hockey player who was forced to become a laborer due to financial constraints. And since then she has been trying to find a place to live in Punjab. One day when she gets a 3 kg packet of drugs, she tries to make fast money by selling it. While doing so, for reasons best known to her, she dumps the entire 3 kg of drugs into a well, thus causing the rage of drug dealers, as it is a profit for them. The deal was The drug peddlers are extremely annoyed by her action and they not only rape the compulsive Pinky Kumari but also keep her as a captive with them. She repeatedly tries to escape from their clutches but every time she fails. The third angle of the film’s story is Dr Preeti Sahni (Kareena Kapoor Khan) under whom Balli Singh, Sartaj Singh’s (Diljit Doshanje) younger brother, is being treated for a drug overdose. During Bally’s treatment, Sartaj Singh analyzes and realizes its pitfalls that these banned substances are very harmful to people. He then joins Preet Sahni in his campaign against drugs and to expose the drug mafia.

Can Rockstar Tommy Gabru Singh regain his lost identity once again, does Pinky Kumari manage to break free from the clutches of the drug mafia< What happens when Tommy Singh and Pinky Kumari cross each other's paths < Whether Dr. Preeti Sahni and Inspector Sartaj Singh succeed in their campaign against drugs and expose the drug mafia in Punjab, all this will be known only after watching the film.

First things first, Udta Punjab is a serious film full of darkness. The film’s screenplay (Sudip Sharma, Abhishek Chaubey) gets entangled in multiple storylines at the same time which makes the film very complicated. Abhishek Chaubey, who gives glimpses of his highest directing ability with his previous films Ishqiya and Dedh Ishqiya, faces a challenge in narrating the dark story of the film Udta Punjab. While the film progresses, it also seems to miss out on many parts, especially in the intermission. Abhishek Chaubey struggles to keep engaging in the latter half of the film in an attempt to piece together multiple stories.

Talking about the acting, the biggest strength of Udta Punjab is its excellent performance. Sometimes actors have to give such challenging characters which are completely outside their comfort zone. Shahid Kapoor and his rockstar look which he has never tried before, created a huge buzz, curiosity and curiosity among his fans. Shahid manages to breathe life into his character while delivering the much needed humour, otherwise the film is serious. He has got a lot of support from the talented Satish Kaushik in the film. Alia Bhatt, on the other hand, does not look that attractive in her role. It is true that Alia has left no stone unturned to portray her Bihari character in the film and justice has been done to that part as well. Kareena Kapoor looked good in her character. Udta Punjab marked the entry of a new Punjabi actor Diljit Doshanje who left an impressive image in the film and also made an impressive Bollywood debut. If Udta Punjab is just a glimpse of what he is capable of, then Diljit is indeed the name that will continue to be seen in Bollywood. The rest of the actors help take the film forward.

The decent music of the film with two songs Chitta Ve and Ik Kudi from the film could have become a hit music album and would have helped the film immensely. On the other hand the background score of the film (Bendict Taylor, Naren Chandavarkar) is impressive and helps to convey the film.

The film’s dialogues (Sudeep Sharma) are predominantly Punjabi and audiences who do not speak the language may be a bit cut off from it. The cinematography of the film (Rajeev Ravi) is average, the editing of the film (Meghna Sen) could have been tighter which could have helped the film manifold. Definitely believe the length of the film is its villain.

All in all, Udta Punjab is a serious film full of darkness, which doesn’t provide the traditional entertainment that audiences look for in Bollywood movies. At the same time, the film is bold and brave with strong performances from all the actors.