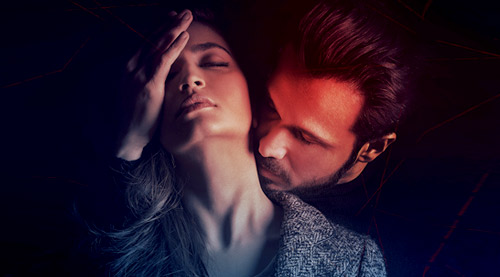 It began in the year 2002, when Vikram Bhatt directed the Darwani film Raaz with Bipasha Basu, Dino Morea and Malini Sharma. After the phenomenal success of this film came Raaz – The Mystery Continues and Raaz 3. Raaz Reboot, the fourth installment of the Raaz franchise, released this week at the box office, starring Emraan Hashmi, Kirti Kharbanda, Gaurav Arora in the lead roles. Will Raaz reboot hit the box office as ‘Raj-Mata’ or does it need to be ‘reboot’ itself.

Vishesh Films and T-Series’ Raj reboot is essentially a horror film that explores many mysteries, human traits and evil spirits. The film begins with a voiceover telling about love and life amidst the picturesque locations of Romania. This is the place where married couple Rehaan Khanna (Gaurav Arora) and his wife Shaina Khanna (Kirti Kharbanda) have recently shifted here. Thereafter, the film delves into the events of a brief flashback, reflecting Rehan’s resistance and reluctance to settle in Romania. Due to Shaina’s insistence, Rehan leaves his decent job in Mumbai and shifts to Romania and gets a very good job in Romania. But after shifting to Romania, Shayna realizes that something is wrong between her and Rehaan as well as Rehaan’s attitude towards her has changed a bit. When Shayna keeps asking Rehaan questions on this issue but he doesn’t get any answers, Shayna becomes very sad and disappointed. Amidst all this, Shayna hears and sees someone in her house and whenever she shares this with Rehaan, Rehaan ignores her. And that’s when Shayna, depressed and longing for love, encounters fashion photographer Aditya Srivastava (Emraan Hashmi). Aditya not only understands Shaina’s condition but also helps her in overcoming the past events in her life. One day, when Rehaan goes out for some work, Aditya meets Shayna to tell him some mysterious things and this mystery completely shakes Shayna. Does Aditya really tell Shayna the reasons behind the evil spirit attacking him, why he helps Shayna without any reason and how Rehaan is connected to all these things, it is only after watching the movie. Is .

When the trailer of Raaz Reboot was released, it sparked a curiosity among the audience. And in this respect the film does not disappoint at all. However, Raaz Reboot’s screenplay (Vikram Bhatt) gets worn out at times. It is definitely tight and fastened. It successfully hypnotizes and keeps the audience hooked till the end of the film. And because of this one, the attention of the audience remains till the end. The story of this film is simple and clear. There are many such memorable and bittersweet dialogues (Girish Dhamija) in the film, especially in the second half.

Though the premise of Raaz Reboot’s story is director Vikram Bhatt’s favorite subject, a few things in the film seem odd. And then his direction seems to falter near the second half but he has managed to handle it. Though the first half of the film is a bit slow but the second half of the film picks up pace with elements of horror and suspense. The film lacks the sex element, which is a forte of Bhatt and films belonging to this genre. Having said that, there are many scenes in this film which are really funny. As there is a scene in which Kirti Kharbanda runs towards her house while shopping, and she is confronted by the chanting of shlokas in the midst of sorcery.

In the first Raaz films of the Raaz franchise (Raaz, Raaz – The Mystery Continues and Raaz 3), Emraan Hashmi certainly seems quite comfortable in his domestic jurisdiction. Though the ‘Imraan-vaad’ was not featured strongly in the film which might leave the audience a bit disappointed, yet he has tried his best to do full justice to his character and speed up the story. Don’t miss the scene of his confrontation with Gaurav Arora. Talking about Gaurav Arora, he has given a great performance in this film. He is very good in his role. Raaz reboot movie can give wings to his Bollywood career. However, the biggest surprise of the film is Keerti Kharbanda. His on-screen presence in the film and the scintillating payoff can make the film a must watch. Although Raaz Reboot is her first Bollywood film, she did not appear as a debutante in the film at all but looks quite experienced. The film essentially falls under the aforementioned trio (Emraan Hashmi, Kirti Kharbanda, Gaurav Arora), with the rest of the cast helping to take the film forward.

Raaz Reboot’s music (Jeet Ganguly, Sangeet Haldipur, Siddharth Haldipur) is mesmerizing and manages to keep the audience hooked. On the other hand, the background score (Raju Singh) and sound effects of the film match perfectly while staying in sync with the story of the film and enhance the viewing experience.

Cinematography (Manoj Soni) of the film is good. The editing of the film (Kuldeep Mehn) is average.

Overall, Raaz Reboot presents an unconventional horror story that will leave you in awe. If you are a fan of supernatural thriller/horror movies, then get ready to be scared and surprised with this movie.