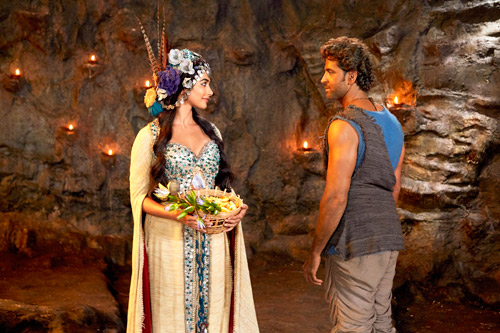 In recent times, filmmaker Ashutosh Gowariker has become synonymous with historical films and clean sets based on larger-than-real-life scenarios. Movies like Jodha Akbar, Swadesh and Lagaan are proof of this. Another period film from Ashutosh Gowariker’s box office, Mohenjo Daro, released at the box office this week. Will Mohenjo Daro have a historic run at the box office or will be a disaster, let’s analyze.

The film begins with the 2016 BC era in the North West region, set to take place in prehistoric India. The story of the film is based on the time when people lived under the Indus Valley Civilization. The film’s story progresses slowly with the introduction of Sarman (Hrithik Roshan) of a small village named Aamri and his victorious battle with a predatory crocodile. On the one hand, the villagers congratulate Sarman on this victory, while on the other hand, Sarman insists on visiting Mohenjo Daro, but Sarman’s uncle (Nitish Bhardadj) and aunty for some reason only they know, He doesn’t seem inclined to send Sarman there. One day, after much reluctance, Sarman’s uncle and aunt give permission to Sarman’s request to visit Mohenjo Daro but at the same time hand him an identity coin. When Sarman reaches Mohenjo Daro, he sees, among many other things, the beautiful Sindhu daughter Chani (Pooja Hegde), the daughter of a religious pundit (Manish Choudhary). It turns out to be an untold love at first sight for both, Sarman and Chani. One day, a curious Sarman sets out to visit the upper town in search of Chani. And when Sarman comes here, apart from being stunned by the splendid scenery and places, he also witnesses the unequal rule under the evil ruler Meham (Kabir Bedi), who had been exiled from Harappa some time ago. Meham, because of his powers, tries to rule over everyone by force, in which his son Moonja (Arunoday Singh) also has a big hand. In no time, Sarman becomes a public representative and raises his voice against Meham’s atrocities. Amidst all this, the pandit reveals a secret to Sarman which not only stuns Sarman but also leaves him completely stunned. What were the secrets about which Sarman came to know, what was his connection with the city of Mohenjo Daro, and whether Chani and Sarman’s love would blossom… All this will be revealed in the rest of the story which will be known only after watching the film. Is .

Despite the huge easel of the film, the story and screenplay (Ashutosh Gowariker) of the film is majorly disappointing and leaves the audience very disappointed. At this point of time, while writing screenplays of such films, one has to ensure that the audience and their understanding cannot be underestimated. The sad part is that Ashutosh Gowariker failed on this front.

Coming to the performances, the film is clearly the film of the extremely versatile actor Hrithik Roshan, who has become the most loved man for such a role at the moment. With his Greek god look and physical stature, Hrithik Roshan does full justice to his role from a simple, pompous farmer to a savior. Hrithik has engulfed the film with his mesmerizing acting and flexible action. Hrithik looks everywhere in the film. Despite the entire film walking on Hrithik’s shoulders, the script of the film has proved to be very weak. The film’s actress Pooja Hegde made her Bollywood debut with Mohenjo Daro after doing several films in the South. Despite past experience, Pooja looks average in this film. Veteran actor Kabir Bedi has essayed the role of Meham. What makes Kabir Bedi special is his looks and his middle voice, both of which have been used beautifully by Ashutosh Gowariker. Apart from this, Arunoday Singh, Suhasini Mulay, Nitish Bharadaz give full support in taking the film forward.

We would like to make a special mention to the film’s costumes (Neeta Lulla), the film’s VFX swings between clumsy and average. There is nothing extraordinary in the music (AR Rahman) of this film, as one would normally expect from a musical magician. The background score of the film is decent, but it was noisy at many places.

The cinematography (CK Muraleedharan) of the film is above average. The editing of the film (Sandeep Francis) is one of the shortcomings of the film.

All in all, Mohenjo Daro is a grand historical fantasy story that only seems appealing in parts. This film does not bind and excessive drama spoils the plot of the film. From the box office point of view, competition from Rustom and lack of significant narrative will prove to be a major bottleneck for the film.