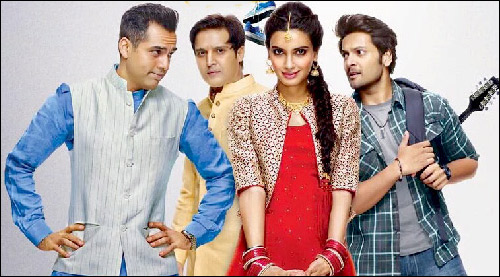 Two different genre films Mohenjo Daro and Rustom released at the box office last week. The romantic comedy film Happy Bhag Jayegi released this week at the box office. This film will prove to be a good comeback for the beautiful Diana Penty, who went missing from the silver screen for a while after her debut film Cocktail. Will Happy Bhag Jayegi prove to be successful in entertaining the audience…

The film Happy Bhag Jayegi begins in Amritsar, where the Indo-Pak Agriculture Conference takes place. This important conference is presided over by the former Governor of Pakistan, Javed Ahmed (Javed Sheikh), who wants his beloved son Bilal Ahmed (Abhay Deol) to join politics like him and change the history of Pakistan. But Bilal wants to become a cricketer but he sacrifices his desires for the sake of his father. As the conference ends, Bilal reaches his home in Lahore (Pakistan) and he is surprised to see a mysterious fruit basket moving and out of it comes Happy (Diana Penty), a lively girl dressed in a wedding dress. After interrogation it is revealed that Happy has escaped from her marriage with city corporator Daman Singh Bagga (Jimmy Shergill) in Amritsar as she is actually in love with Guddu (Ali Fazal) but Happy’s father ends this relationship. are against. On the other hand, when she comes to know that she has fled to Pakistan, she also confesses that her escape to Pakistan from her marriage is just a coincidence. Amidst all this, Bilal Ahmed, who is already Zoya’s (Momal Sheikh), falls in love with Happy. On the other hand, the search for Happy starts in India. After that begins a series of chases, hideouts, kidnappings and conflicts between India and Pakistan. Will Happy be able to stay safe in Pakistan despite so much pressure and with whom and under what circumstances will she marry, the answer to all this is found after watching the film.

The film is written and directed by Mudassar Aziz. Despite the fact that the script of the film is as expected, it makes the film entertaining. The comedy scenes in the film are commendable and they work magic in the first half of the film. The film’s storyline running on different tracks and the romantic angle makes the film very sluggish after the intermission, with some of the scenes being forced.

As a director Mudassar Aziz, who made a weak film like the forgettable Dulha Mil Gaya in 2010, has gifted a good and enjoyable film like Happy Bhag Jayegi. The biggest feature of this film is that the way the characters of the film are presented, they seem very real and this works in favor of the film. The film has a very impressive opening and continues till the first half, but gradually the film slows down due to the different storylines. The best part is that despite the film losing its track in the second half, Mudassar Aziz manages to get the story back on track in the climax. Mudassar Aziz deserves appreciation not only for making the characters of the film interesting and very relatable but also for writing the funny and memorable dialogues of the film. Though Happy Bhag Jayegi is a bit reminiscent of R Madhavan and Kangana Ranaut starrer Tanu Weds Manu, Mudassar Aziz successfully managed to give the film his own unique style. Though the shadow of Tanu Weds Manu in Happy Bhag Jayegi starring R Madhavan and Kangana Ranaut is clearly visible, Mudassar Aziz manages to give a different color to the film. Amidst all this, the exemplary impression of Aanand L Rai is seen everywhere. The specialty of this film is that despite the film being shot in the environment of India and Pakistan, no political opinion has been used in its plot.

On the acting front, as it is well known from the title of the film Happy Bhag Jayegi, the entire film is placed on the shoulders of the extremely talented actress Diana Penty, who has returned to the silver screen after a long time. Diana Penty, known for her strong performance in the film Cocktail, did not sign any films after Cocktail. Happy Bhag Jayegi’s script is as if written for him (his character in this film is completely different from his character in Cocktail). Although Diana Penty’s tantrums sometimes remind us of Jab We Met’s Kareena Kapoor, Diana uniquely maintains her identity. Abhay Deol, whose previous film was One By Two, which did not do well at the box office, completely impresses in this film as Pakistani youth leader Bilal Ahmed. His presence in the film was very nice and his character in the film is really commendable. Jimmy Shergill looks good in the character of Daman Sing Bagga in the film. Jimmy plays his character with the utmost sincerity and seriousness that is visible in the film. Pakistani Momal Sheikh (from Pakistan), who debuted in Bollywood with this film, whose confidence is reflected in her character. Happy Bhag Jayegi is Momal Shaikh’s Bollywood debut, apart from the fact that she was pitted against veteran actors but still held onto her character firmly. On the other hand Ali Fazal whose character was in this film as a lover boy did full justice to his character in the film. A special mention would be made about Piyush Mishra who proved to be memorable as the policeman Usman Afridi in the film. The rest of the cast help in taking the film forward.

There is hardly any scope for music (Sohail Sen) in the film. The film’s background score (Sohail Sen), impresses and serves as one of the key elements in the film’s story. The cinematography (Saurabh Goswami) of the film is good and deserves appreciation for showing Pakistan in a very convincing way. The editing of the film (Ninad Khanolkar) is good.

Overall, Happy Bhag Jayegi Dil is a good looking film that will make you happy. At the box office, the film will prove to be an award for its makers.