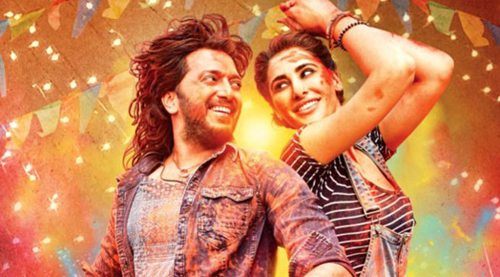 Riteish Deshmukh started his Bollywood career in the year 2003 with the film Tujhe Meri Kasam and the heights he has reached today, he has been able to prove himself as a versatile and quite settled actor. Although there is no doubt that he has given most of the hits of his career in multi-starrer films. Riteish Deshmukh’s solo hero film Banjo, which also featured Nargis Fakhri opposite Riteish, released at the box office this week. Will Banjo turn out to be a musical for both its makers and Riteish Deshmukh, or will the film lose its strings, let’s review.

Banjo is essentially a musical action film which is the story of a musician to survive in this world without compromising on his livelihood and self-esteem. The film begins with a musical introduction by Mumbai-based banjo player Nand Kishore aka Tarat (Ritesh Deshmukh), who works two jobs together to earn extra money. Tarat’s banjo band consists of three members Pepper, Grease (Dharmesh Yelande) and Waza. On the other hand, New York based Chris (Nargis Fakhri) wants to enter a prestigious music championship. She searches for the right music to participate in the world-class music championships, and is helped by her Mumbai-based friend (Luke Kenny). He sends Nargis a recording of Tarat’s banjo performance during the Ganeshotsav festival as a help. Nargis gets very impressed seeing Tarat’s performance. After seeing this, Nargis comes to Mumbai and searches for Tarat and his talented team members so that she can participate in the world class music championship with them. Tarat unknowingly becomes Chris’s guide and friend in Mumbai. And, while doing so, he falls in love with Chris. And at the same time, Tarat and his co-stars reveal to Chris that they are banjo players, but do not give reasons out of fear of humiliation and rejection. They still do not know that Chris has come to India to find his own band. There is a story of one day when Chris learns about Tarat and his banjo band, his happiness knows no bounds and she immediately joins them for her songs. Amidst all this, an unfortunate incident occurs that completely changes the lives of Tarat, his band member, and Chris. Will Tarat be able to muster up the courage to speak his heart out to Chris, what has happened to the unfortunate part of Tarat and his co-stars, and will Tarat be able to help Chris reach his music championship, all of which You will know only after watching the rest of the film.

Banjo’s promo beautifully captures the life of a street musician, the film has managed to throw light on it completely. The film’s story setup (Kapil Sawant, Nikhil Mehrotra and Ravi Jadhav) is related. Taking a solid start, the film throws light on the lives, lifestyles and dreams of those people (unknown geniuses) who live in slums. The film succeeds in establishing the character of banjo player Nand Kishore aka Tarat (Riteish Deshmukh) and his band members. The life and lifestyle of the slum dwellers have been portrayed very well in this film. The film’s dialogues (Kapil Sawant, Nikhil Mehrotra and Ravi Jadhav) are simple, pompous and funny. There are many such one-liners in the film that have been used as punches in the film, which will surely be loved by the audience.

Director Ravi Jadhav, who has proved his mettle in Marathi films like Natrang, Balgandharva, Balak-Palak, Timepass, Reggae and many more, has made his Bollywood debut with Banjo. Being a seasoned hand in ‘Saarthak Disha’, Ravi Jadhav has done a good job in the banjo. But due to the weak writing and confusing story of the film, the film seems to deviate from its story at many places. This is one thing that is stopping Ravi Jadhav from putting all his efforts into directing. For example, Nargis’s character and her life goals are bound to enthrall the audience. The character of Nargis in the film starts out as a DJ who later turns into a music producer and finally emerges as a performer. And all this happens because she wanted to attend the New York Music Festival, which, despite being in the film, is never shown. His joining Ritesh’s group, searching for sponsors, performing in Indian clubs and not serving his purpose of coming to India. On the other hand, even Mohan Kapoor’s character definitely needed more clarity. The biggest downside of the film is its abrupt ending. The film’s abrupt end seems like a premeditated attempt to shorten the film, which certainly turns the film’s narrative upside down badly.

Talking about acting, this entire film sits on the shoulders of Riteish Deshmukh. Having proved his mettle in multi starrer films (mostly double meaning comedies), it is really great to see Riteish Deshmukh in this intense avatar. Banjo looks like a solo film with a responsibly scintillating performance from Riteish Deshmukh. On the other hand, Nargis Fakhri has done well in the film. She is completely immersed in her character and hence, she manages to do complete justice to her exotic character as well as struggle to adjust to a banjo player living in a slum and adapt to his quirky lifestyle. succeed in doing. Luke Kenny, who completely portrayed his character in the film, seemed very believable. Don’t miss the scene in the film in which he reveals his identity (in Marathi-Hindi terminology) to Riteish Deshmukh and his band members. Dharmesh Yelande, who is best known for his dancing skills, comes across as a miracle in the film. His comedy timing is tremendous. The other actors, who play the members of Riteish’s band, have been superb.

As far as the music of the film (Vishal-Shekhar) is concerned, despite Banjo being a musical, only one song Udan Choo will prove to be a chartbuster. Apart from this, the rest of the songs in the film have been pleasant, but do not leave much of an impact. On the other hand, the background score (Sourav Roy) of this film is good and it fits in with the narrative of the film.

Cinematography (Manoj Lobo) of the film is good. The editing of the film (Devendra Murdeshwar) is average.

On the whole, Banjo loses out with its low publicity, confusing second half and bizarre climax. The film will struggle to garner audiences at the box office.