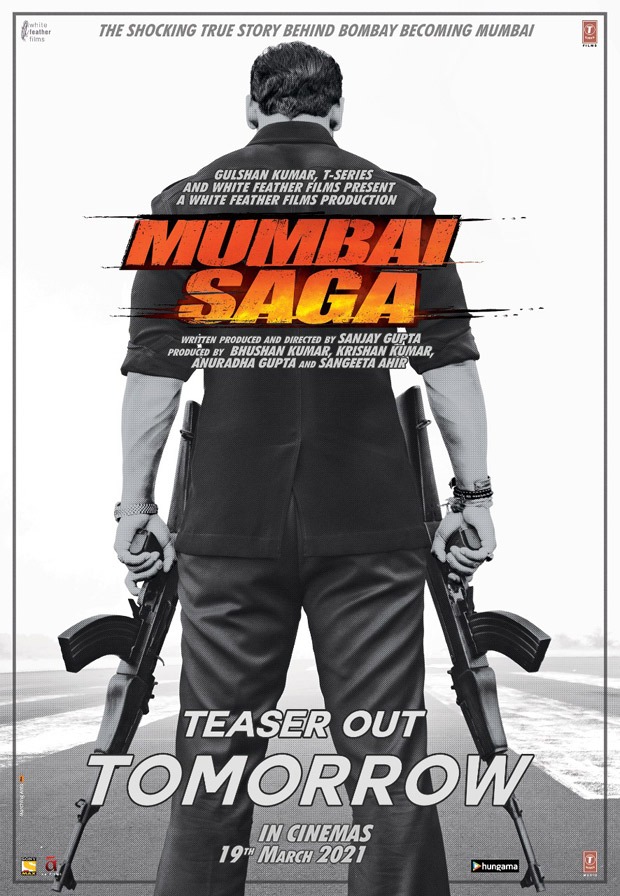 Mumbai Saga starring John Abraham, Emraan Hashmi and Kajal Aggarwal is gearing up for its release. Mumbai Saga by producer Bhushan Kumar and Krishan Kumar (T-Series), Anuradha Gupta (White Feather Films) and Sangeeta Ahir, and writer, producer, director Sanjay Gupta will hit the theaters on March 19, 2021. Bollywood Hungama was the first to inform about this. Apart from the release date of the film, the makers have also announced its teaser release date which is 24 February i.e. tomorrow. That is, tomorrow the fans will get to see the first glimpse of Mumbai Saga. Along with this, a new poster of the film has also been shared, in which John Abraham is seen in a different avatar.

John’s back look is shown in the poster shared. In the poster, he is seen holding a gun in his hands showing his back. Mumbai Saga, directed by Sanjay Gupta, will see John as a don while Emraan Hashmi will be seen as a police officer. Fans were eagerly waiting for the release of this film and finally today the makers have announced the release date of the film by tweeting.

Mumbai Saga is a film based on true events set in the 80s and 90s. The whole story of the era of Bombay becoming Mumbai will be shown in this film. Apart from John and Emraan Hashmi, the film also stars Mahesh Manjrekar, Suniel Shetty, Prateik Babbar, Rohit Roy, Gulshan Grover and Amol Gupte in pivotal roles.

This is John and Sanjay Gupta’s third film together. Earlier, the pair had worked in films like Zinda and Shootout at Wadala.