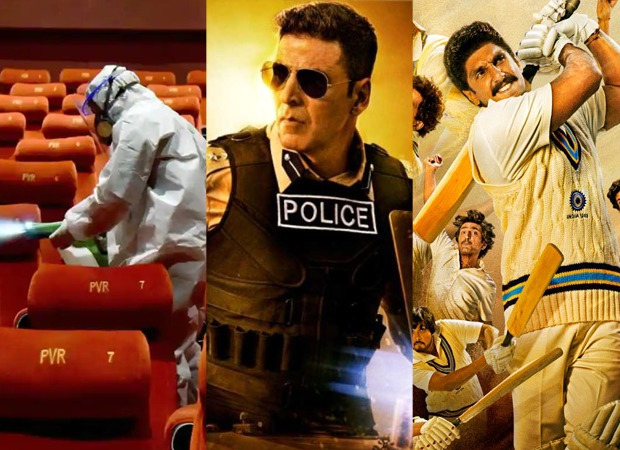 Films News > Blog > Bollywood News > Cinemas will reopen in Maharashtra from October 22; New release date of many big films including Akshay Kumar’s Suryavanshi, Ranveer Singh’s 83 to be released in theaters will be announced soon.
Bollywood News

Cinemas will reopen in Maharashtra from October 22; New release date of many big films including Akshay Kumar’s Suryavanshi, Ranveer Singh’s 83 to be released in theaters will be announced soon.

Theaters were closed in Maharashtra due to the dreaded second wave of the Corona epidemic. But now in view of the second wave of the weakening corona epidemic, the Maharashtra government has given permission to reopen the cinema halls of the state. After the reduction in the cases of Kovid-19 in India, the Maharashtra government announced that theaters will be able to open in the state from 22 October. However, instructions have also been issued to take full care of the corona protocol in cinemas.

Theaters and temples will reopen in Maharashtra

Vaccination work is being done on a war footing for the prevention of corona virus in the country. Under which millions of people are being vaccinated against Corona every day. The process of vaccination is going on fast in Maharashtra too. Therefore, now Maharashtra Chief Minister Uddhav Thackeray has ordered the opening of cinema halls, multiplexes and theaters in Maharashtra from October 22 with full corona norms. Meanwhile, everyone has to follow the Corona rules very seriously.

Chief Minister Uddhav Thackeray held an important meeting with the artists, directors, producers, owners of multiplexes and cinema halls associated with cinema and plays. After this the Chief Minister decided to start cinema halls and theaters. Under this decision, from October 22, all the theaters, drama houses in the state will be opened.

Chief Minister Uddhav Balasaheb Thackeray has announced that cinemas and theaters in the state will be allowed to open after October 22 in compliance with health norms. A detailed working method SOP is being prepared and will be announced soon.

It is expected that as soon as the theaters open in Maharashtra from October 22, the release dates of the big films that have been waiting for release for a long time will be announced soon. These big films include Akshay Kumar’s Sooryavanshi, Ranveer Singh’s 83, Salman Khan’s Ultimate – The Final Truth, Akshay Kumar’s Prithviraj, Rani Mukerji and Saif Ali Khan’s Bunty Aur Babli 2 etc.