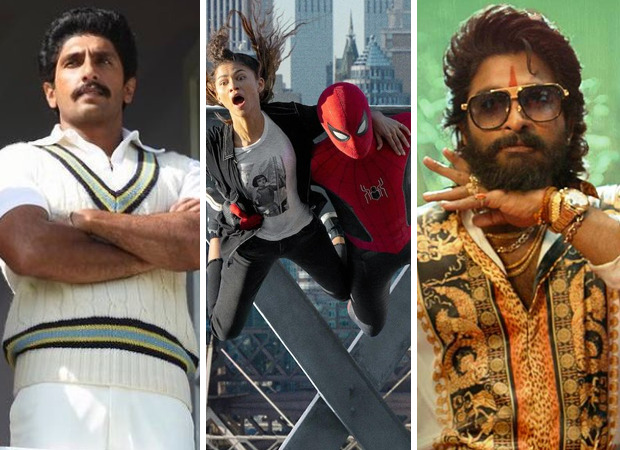 Among the recently released films at the Indian box office, the Hollywood film Spider-Man: No Way Home has won. Spider-Man: No Way Home, which has almost crossed the 200 crore mark so far, is doing well while Allu Arjun and Rashmika Mandanna’s Pushpa (Hindi) is also doing well. People are liking Pushpa (Hindi) in Hindi speaking areas. But Ranveer Singh starrer 83 directed by Kabir Khan failed to perform as expected.

First of all, let’s talk about Ranveer Singh’s 83, it was a film that should definitely have entered the 100 or 150 crore club but alas it did not live up to the expectations. Although it was highly appreciated by the critics, but despite this the film is not able to garner the audience, as a result, it is failing to earn well at the box office. 83 has so far earned just Rs 66.66 crore. It is expected that this earning will increase in the coming days. Because now the jersey to be released on 31st December is also out of this race and its release date has been postponed.

Spider-Man: No Way Home has so far collected Rs 186.12 crore at the box office. And this weekend the film is expected to join the 200 crore club. Marvel Cinema’s superhero drama Spider-Man will get the benefit of this weekend that no film is releasing at the box office this week, its direct effect will be seen on the film’s box office. Although the audience is giving a lot of love to Spider-Man: No Way Home, so this film is still successful in garnering the audience in theatres.

On the other hand, if we talk about Allu Arjun and Rashmika Mandanna’s Pan India film Pushpa – The Rise Part 1, this film is doing well in South India as well as Pushpa (Hindi) is getting a huge number of viewers in Hindi speaking areas as well. Huh . Pushpa (Hindi) is being well received on single screens. So the film has so far collected Rs 45.50 crore at the box office, which is definitely the best for a South film. Pushpa (Hindi) will also not get any box office competition this week which will benefit its box office collection. The film is expected to earn 50 crores in the next 3 days.