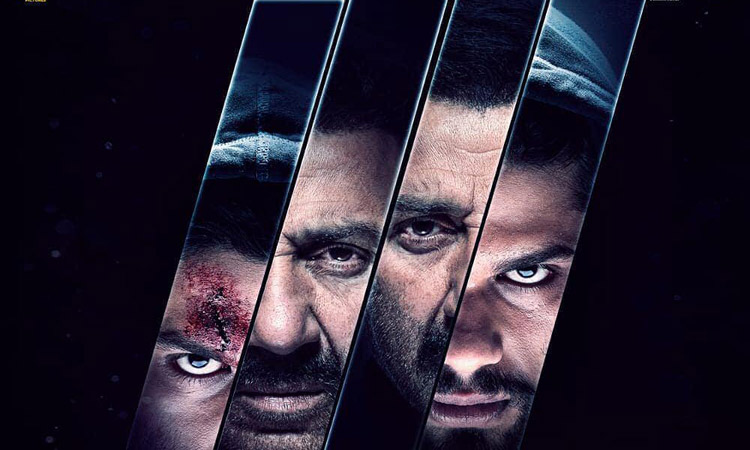 Before making her Bollywood debut with Tara Sutaria and Ananya Panday’s Student Of The Year 2, this week another star made her Bollywood debut with the film Blank which released this week titled Karan Kapadia. Karan Kapadia, nephew of actress Dimple Kapadia, is in discussion about his debut film. To make Karan’s debut more spectacular, his brother-in-law Akshay Kumar has also done a special number in his brother-in-law’s film. So do all these factors work in making Karan’s debut film Blank a hit or will it be in vain. Let’s review.

Blank is the story of a terrorist who is himself a ‘living explosive’. Hanif (Karan Kapadia) is a part of the Tahrir al-Hind terrorist group, led by Maqsood (Jameel Khan). He has arrived in Mumbai along with other terrorists with a deadly plan to detonate 24 bombs by each terrorist. But on the day of the blast, terrorist Hanif gets into a road accident. He then faints and is taken to the hospital. When the hospital staff see a live bomb tied to Hanif’s body, he is shocked. Immediately thereafter, ATS chief SS Dewan (Sunny Deol) is informed. The doctors are unable to separate the bomb from his body as it is attached to his heart. Then when Hanif regains consciousness, another obstacle comes in front of the Diwan. Hanif has lost his memory due to the accident and has no recollection of where he is from, how the bomb got into his body and which terrorist group he belongs to. Dewan’s juniors, Husna (Ishita Dutta) and Rohit (Karanvir Sharma), meanwhile capture another suicide bomber, Farooq. Knowing that the police now have another terrorist from whom they can get all the information of the terrorists, Aruna Gupta, Dewan’s senior, orders that Hanif be taken out of the city and killed. On the other hand, Husna successfully locates Hanif’s house where she finds the blueprint of the bomb attached to Hanif’s body. From here he learns that 24 bombs in the city are linked to the bomb on Hanif’s body. If Hanif’s bomb explodes, the remaining 24 bombs will also explode. She immediately informs the Diwan. At the same time, a group of terrorists arrive there and attack the police. They also take Hanif away. What happens next will be known only after watching the rest of the film.

Pranav Adarsh’s story is average. His screenplay is decent, but it has many flaws. Some essentials have been omitted which is surprising. After all, the duration of the film is quite short and the extra scenes of 4-5 minutes have not done any harm to the film. Behzad Khambata’s dialogues are simple and good.

Considering that this is his directorial debut, Behzad Khambata’s direction is quite good. He has handled some scenes cleverly.

Blanc is only 111 minutes long but it seems long enough. The film starts at a critical juncture and then goes into flashback mode. The first half isn’t that great but still fine and flawless. Hanif’s fight scene in the hospital is captured very well. His interrogation sequence feels a bit drawn out but also keeps the audience hooked. The intermission point of the film is the best part of the film. Here three incidents happen simultaneously – Husna is searching for Hanif’s house, Rohit is looking for the godown while Diwan is about to execute Hanif. All these episodes are well directed. After the interval, however, the film starts to fall apart. The action scene in the tourist office is long but well portrayed. The climax of the film is hopeless and unpredictable. That’s fine but there is no logic here. It would be difficult for the audience to understand the events of the bomb on Hanif’s body.

Karan Kapadia has made a great start. He does full justice to his character. Surprisingly, the film is extensively marketed in his name, but in the second half, he is not seen on screen. Sunny Deol is excellent and in his flop/bad films [यमला पगला दीवाना फ़िर से, मोहल्ला अस्सी, भैय्याजी सुपरहिट]After starring in , he finally proves his worth in this film. The audience will love to see Deol in this film. Ishita Dutt gives her best shot and makes her presence felt. Jameel Khan (Maqsood) is entertaining. but his acting baby [2015] I can remind you of one of his characters. Kishori Shahane (Diwan’s wife) is devastated. The actors playing the roles of Farooq, Bashir, Aruna Gupta and Dewan’s son Raunak are average.

There is no room for music in this. ‘Ali Ali’ is picturized on Akshay Kumar and played at the end. ‘Himmat Karja’ goes to waste and the way Sunny Deol and others start doing a particular hand movement at a particular moment seems incomprehensible. ‘Warning Nahi Dunga’ is played during the opening credits and it works fine. Roshin Dalal and Kaizad Gerd’s background score though is quite powerful and adds to the impact.

RD’s cinematography is top-class and gives a better look to the film. The bird’s eye shots are worth seeing. Vikram Dahiya’s action is not bloody and good to watch. Rajendra Sharma’s production design is apt. FutureWorks Media Ltd’s VFX is authentic. Sanjay Sharma’s editing is fine.

Overall, Blank is based on terrorism related incidents and is well directed and performed. Sunny Deol fans will love him in an action packed role after a long time. At the box office, the film will be average.