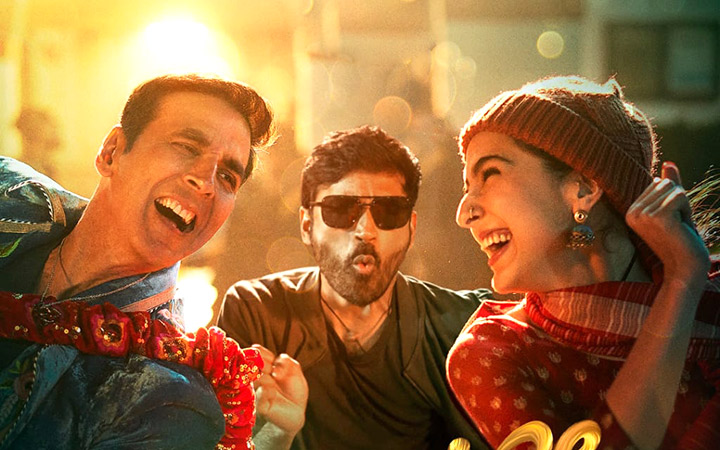 Atrangi Re is the story of a girl who falls in love with two men. Rinku Suryavanshi (Sara Ali Khan) lives in Siwan, Bihar with her extended family. Rinku’s parents were murdered by a large family when she was young. Rinku falls in love with a mysterious man named Sajjad (Akshay Kumar) and has eloped with him several times. After his latest failed runaway, his grandmother (Seema Biswas) gets fed up with him. She tells her family that she should get married with any available man, preferably someone from outside Bihar. His family members have seen Vishu (Dhanush) in their city. He is a medical student who has come to Siwan for a camp. His marriage with his girlfriend Mandakini aka Mandy (Dimple Hayati) is already fixed and their engagement is few days away. Rinku’s family kidnaps her and forces her to marry Rinku. The next day, they book tickets for him on the train to Delhi. On the train, Vishu is surprised about last night’s development. Rinku tells Vishu that she loves Sajjad and will move in with him when she reaches Delhi. Vishu is relieved to know that this is a forced marriage for him too. He reaches Delhi, where he studies. Rinku tells her that Sajjad has gone to Africa to study magic and he will be back in 10 days. Vishu has to leave for Madurai. Hence, he asks Rinku to stay in his hostel till Sajjad returns. Or Riku can attend her engagement in Madurai. Rinku accompanies her to Madurai where Vishu and Mandy get engaged. All is going well until Mandy sees the video of Vishu and Rinku’s wedding. What happens next will be known only after watching the rest of the film.

Himanshu Sharma’s story is new and unconventional. However, the screenplay makes this weak plot worth watching. The author has added some very touching and impactful scenes. Therefore, nobody cares, even if everything is going on ‘Atrangi’. Himanshu Sharma’s dialogues, as expected, are one of the high points of the film as they are very funny and fit the character traits.

Aanand L Rai’s direction is superb. His storytelling ability has evolved and this is visible in many scenes. His biggest win is that he manages to grab the attention of the audience and handles this type of story well. Anand successfully handles the film. He also makes important comments on mental health. The second half, however, could have been a bit sharper and more sensitive.

Atrangi Re starts off very well. Some scenes in the first half are extraordinary like the forced marriage of Rinku and Vishu, their conversation on the train etc. The sequence in which Vishu performs a monologue in Tamil in front of an emotional Rinku is a sight to behold. The scene a few minutes before the intermission point is astonishing. The film remains interesting even after the interval, though some sequences are difficult to digest. The way Rinku lives peacefully in an all boys hostel and no one understands, it is incomprehensible. However, even more incomprehensible scenes come in the second half. The film ends at a juncture where the conservative audience would not be happy with such an outcome.

Atrangi Re is a wonderfully acted film. Sara Ali Khan Love Aaj Kal [2020] I played the character of an ‘Atrangi’, but he could not do anything. But this time she proved that she is one of the most talented actresses among the actors of her era. Sara’s character was not that easy and as the film progresses, it is revealed how complex and mysterious Sara’s character is becoming. But Sara plays it well. As expected, Dhanush gives an amazing performance. He has given many memorable performances till now but still, this film has taken his acting to a whole new level. Some of his scenes like the emotional monologue, his dance in Loo are very impressive. But there are some scenes where he doesn’t have any dialogues but he speaks a lot with his eyes and silence. Akshay Kumar looks good in supporting role. He adds a special appeal to the film. Ashish Verma (Madhusudan) is dependable as a sidekick. Seema Biswas and Dimple Hayati are fine in their minor roles. Pankaj Jha (Rinku’s maternal uncle) and Gopal Dutt (divorce lawyer) are hardly there and go to waste. Mannat Mishra (Baby Rinku) is cute.

AR Rahman’s music is soulful and is one of the USPs of the film. ‘Rait Zara Si’ is like the theme of the film. ‘Chaka Chak’ is foot-tapping and at best. ‘Tere Rang’ and ‘Toofan Si Kudi’ are a surprise spring and have been shot well. ‘Tumhe Mohabbat Hai’, ‘Garda’ and ‘Little Little’ are not that impressive. AR Rahman’s background score is superb and it gives a nice touch to many scenes.

Pankaj Kumar’s cinematography is very good. Out-of-the-box camerawork is not to be expected in a film of this genre, but the cameraman does wonders. Nitin Jihani Choudhary’s production design is very attractive. Ankita Jha’s costume gives a genuine feel. Manish Malhotra’s costume could be trendsetting for Sara Ali Khan. Sham Kaushal’s action is fine. RedCillies.VFX’s VFX is rich. Hemal Kothari’s editing could have been tighter.

Overall, Atrangi Re is based on a very unconventional plot. But it addresses an important topic, that is, mental health, which is dealt with with sensitivity. Apart from this, the excellent performances of the cast, songs and music and many well handled scenes make the film worth watching.